This article looks at the Taliban’s crimes toward members of Afghan civil society, such as artists, women, journalists, and minorities, during the first few days since the fall of the Afghan capital. On August 15, 2021, a day that has been marked the Fall of Kabul, the Taliban entered the Presidential Palace in Kabul, as President Ashraf Ghani fled the country the same day.

Nadia Momand, a female Afghan journalist, tweeted: “We built houses, careers, education, business, friendship, and a life full of hope for a better future. We were expecting challenges but not such an obstacle: #Afghanistan’s #collapse to #Taliban once again. The shameful history; Aug 15, 2021.”[1] M.R. Dawood Zai, a community leader, tweeted on the fall of Kabul: “Oh world! To the UN. To everyone! You abandoned us. You left us alone in this war that isn’t ours. We screamed and shouted. We warned you of this day, but you didn’t listen to us. This will be remembered. History will remember this. You will be judged. Ah, Afghanistan!”[2]

In the days before and after August 15, Afghan journalists tweeted about the Taliban’s conduct toward the Afghan people, not only in Kabul but also in other provinces of Afghanistan. On August 16, Nadia Momand reported: “Taliban invaded the homes of at least two female journalists in Kabul today. One managed to escape, one is unreachable.”[3] Journalists in Afghanistan appear to have been the first victims of the Taliban’s crimes in the early days.

On August 19, it emerged that Shabnam Dawran, a female journalist at the nation’s Radio Television Afghanistan (RTA), was not allowed to return to work by the Taliban jihadis. “I wanted to work, but they did not allow me to work. They told me that the regime has changed, and you cannot work,” Shabnam Dawran said.[4] 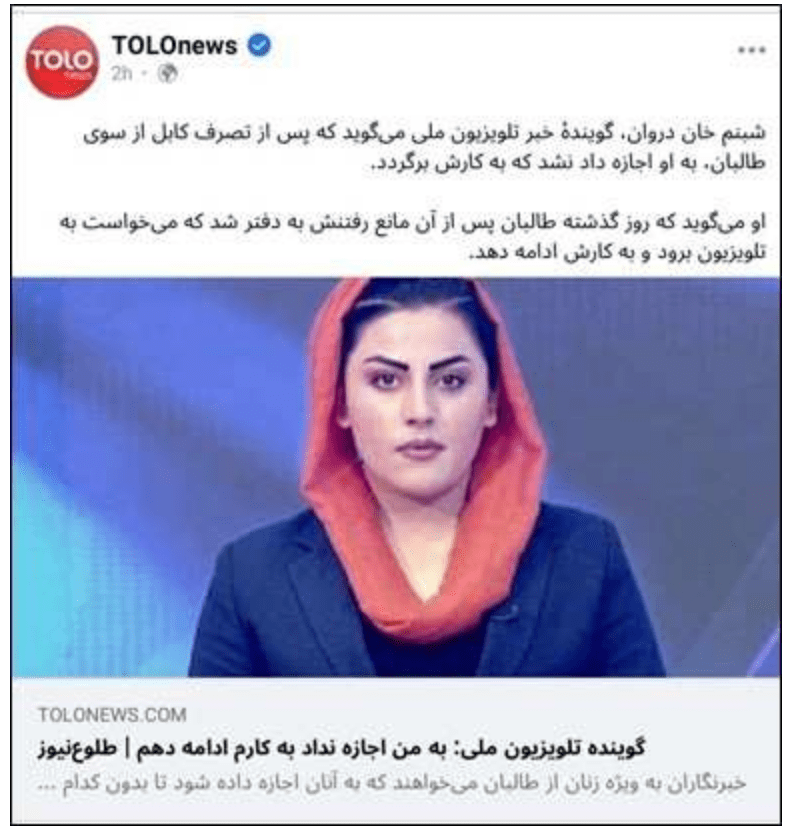 Shabnam Dawran, a female journalist, disallowed by the Taliban from work

The Taliban also banned Khadija, another journalist at RTA, from working, according to a report. “I went to the office, but I was not allowed in. Later other colleagues were banned, too. We talked with our new director who has been appointed by the Taliban,” Khadija said, adding: “There has been a change in the programs; they broadcast their desired programs; there are no female presenters or female journalists.”[5]

On August 18, Taliban militants assaulted three journalists belonging to Ariana News, Pajhwok, and Khurshid TV. Ariana News reporter Mahmoud Naimi and Pajhwok photographer Babrak Aminzadah were beaten by the Taliban while covering a demonstration in Nangarhar, while Khorshid TV journalist Nawid Ahmad Kawesh was beaten at the Hamid Karzai International Airport in Kabul, according to a tweet.[6]

German broadcaster Deutsche Welle tweeted on August 19: “Taliban fighters hunting one of our journalists have shot dead a member of his family in Afghanistan and seriously injured another. The militants were conducting a house-to-house search to try and find him…”[7]

Expressing a common fear of Afghan women, the journalist Nadia Momand tweeted: “A Taliban militant shot dead a girl sitting in a rickshaw on Ring Road in Akhundzada Sahib, Nangarhar province, the cause of which is still unknown. Maybe I’m next…[8]  On August 20, Nadia Momand reported: “Two female students in Kabul have been beaten up with rods & iron by Taliban. They said that we are students and Taliban beat them for standing in front of them. [They] Were told that you are American servants & pilots.”[9]

In an August 22 tweet, Nadia Momand noted that Raha Sizdah, a female student, had been beaten by the Taliban: “The Taliban beat @callmeraha13 for her visible tattoo on [her] hand and she says: They have not changed, but they are smarter now because they monitor people around to [ensure that they do] not take video.”[10]

The Taliban captured Salima Mazari, a female governor who confronted them. Nadia Momand tweeted on August 18: “Know her name #SalimaMazari. When many Afghan political leaders fled, Salima stayed to fight. As one of the first female district governors in Afghanistan, she took on the Taliban & resisted until the end. She has reportedly been captured. Pressure to free her! #FreeSalima.”[11]

A week before Kabul’s fall, the Taliban militants abducted and killed two Afghan policewomen in Ghazni province and threw their bodies in the Kashk area of Ghazni city.[12]

On August 17, a report raised concerns over the Taliban-style punishment meted out to Afghans in Kabul: “In #Kabul Shahrenaw, the #Taliban blacken the face of a man for stealing a car today.”[13] On August 19, a young man was beaten by the Taliban for wearing jeans, according to a tweet.[14] Nasrin Nawa, another Afghan journalist, wrote on August 20: “I have had the most horrifying days of my life since the Taliban invaded Kabul. I saw them beating women, men, and children. The fighters manning checkpoints are haughty & brutal. They can shoot anyone, anything, anytime. Stop this terror and stop the Taliban.”[15]

In Kabul, the Taliban blacken the face of a man for stealing a car

In another incident in the city of Jalalabad, Taliban militants shot a man and a teenage boy for commemorating Afghan Independence Day on August 19 and waving the Afghan national flag, according to a tweet.[16] Local residents in Jalalabad city, according to another report, said that the Taliban beat up two local journalists as they wanted to cover a protest organized against the Taliban.[17]

In Kabul, a man carrying the Afghan national flag was beaten on August 20 by members of the “Taliban Guidance Control,” who also took the flag, according to a tweet by journalist Nasrin Nawa.[18] On August 17, relatives of a young Afghan poet, Mehran Popal, had tweeted that the Taliban militants had detained him on Saturday, August 14, in the city of Herat.[19] On Mehran Popal’s Facebook page, his friends have posted messages asking where he is, but there is no response.[20]

On August 19, local sources in Bamiyan province confirmed in a tweet that the Taliban had blown up a statue of slain Shi’ite Hazara community leader Abdul Ali Mazari in Bamiyan city.[21] Hazara tribesmen are Shi’ites and inhabit both in Afghanistan and Pakistan. The Taliban had executed Mazari on March 12, 1995.

In 2001, the Taliban dynamited in Bamiyan sixth-century statues of Buddha, drawing global outrage. It appears that this time the Taliban will demolish every single statue in Afghanistan, as statues of humans are not permitted in Islam.

Although the Taliban leaders, in messages delivered for Western audiences, have said that they will maintain peace, ground reports disprove their promises. On August 17, an Afghan Twitter account noted: “Many videos circulating on social media show that, contrary to their claims, the #Taliban [are] searching houses, arresting people, and are largely involved in extra-judicial investigations, harassment, and assaults.”[22]

Nasrin Nawa tweeted on August 21: “Many in #Kabul are deleting their social media accounts and messages on phones. Many fear their digital footprint could make them targets of Taliban retribution. Taliban are infiltrating WhatsApp and Facebook groups and confiscating phones as they conduct door-to-door searches.”[23] Raha Sizdah tweeted: “The #Taliban, like two decades ago, use violence against women in society, but now they are smarter and try not to allow anyone to film or photograph these actions so that it doesn’t become a media issue.”[24]

Ahmad Massoud, the son of Afghan national hero Ahmad Shah Massoud, is emerging as the leader of the anti-Taliban opposition in Afghanistan. Ahmad Massoud spoke of the stakes involved about the Taliban’s abuse of human rights: “We have fought for so long to have an open society, one where girls could become doctors, our press could report freely, our young people could dance and listen to music or attend soccer matches in the stadiums.”[25]

Ferdous Samim, an architect based in Kabul, summed up the situation in a tweet: “I was a kid when the #Taliban came to #Afghanistan in [19]96. They were nicer, & people welcomed them. Over time they started adding limitations; banned TV & music, men had to let beards [grow] &, shaved their heads & m[o]ustaches. Banned women fr[o]m going out w/out a confidant. They haven’t changed!”[26]

[1] Twitter.com/NadiaMomand, August 16, 2021. The original English of the all the tweets cited in this article was edited for clarity and standardization.