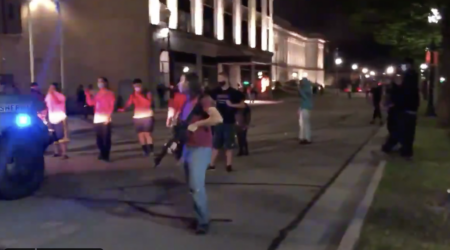 The disturbing video shows at least two rioters with rifles as fellow rioters block police (Twitter).  Townhall’s Julio Rosas is there (Townhall). A video of a rioter lighting a garbage truck on fire (Twitter).  They also torched a furniture store, among other places (Twitter). From Julio Rosas: The situation degraded as a large BLM protest group showed up at the Kenosha County Courthouse. Rioters in the crowd started to throw projectiles at the officers, who responded with tear gas (Twitter). From Rich Lowry: Largely peaceful protesters throwing largely peaceful projectiles at the police (Twitter).

This is war — “Yes, This Is a Revolution”

The battle for the survival of the United States of America is upon us. It has not come in the form of traditional civil war. There are no uniformed armies, competing flags, or alternate constitutions. The great showdown is not being fought within the physical limits of a battlefield. It is instead happening all around us and directly to us. It defines our culture, sustains our media, and gives new shape to our public and private institutions. In this fight, there is no distinction between what was once known as the culture war and politics rightly understood. The confrontation stretches through time and space, reframing our distant past even as it transforms the horizon, erupting from coast to coast, and constraining our lives in subtle and obvious ways. And it’s happening too fast for us to take its full measure.

For partisans, it often feels as if everything stands or falls on the ideological battles of the day. But this is different. This is objectively real, and it’s remaking the nation before our eyes.

We know it’s different this time because the stakes are continually articulated by the enemies of the current order. They are demanding, and in some cases getting, a new and exotic country. The police are indeed being defunded. The statues are coming down. The heretics are being outed. The dissenters are being silenced. The buildings are burning, and the demands are ever growing.In June, the editors of Commentary called this combination of mob violence, cultural torment, and public intimidation “the great unraveling.” Since then, things have gotten appreciably worse.

The great unraveling at first consisted of riots and looting under the pretense of seeking justice for the recently killed George Floyd; the anarchist occupation of a section of Seattle; and a rash of accusations, confessions, and dismissals of individuals who showed insufficient fealty to the new anti-racist paradigm. At the time, extreme policy proposals, such as defunding municipal police departments, were subjects for popular discussion and debate. Everyday Americans swapped Black Lives Matter reading lists and strove, however misguidedly, to broaden their conception of racial inequity.

As of this writing, Portland, Oregon, has endured more than two months straight of anarchist violence directed at federal buildings and employees. In other cities—New York, Los Angeles, Richmond, Omaha, and Austin, to name a few—mob violence continues to erupt regularly, always connected to cries for justice and sometimes resulting in death. Accelerating the general dissolution, police forces have been successfully hobbled in response to the killing of George Floyd, and the resulting spike in murder and violent crime shows no sign of abating. All the while, armchair lynch mobs have continued to claim the scalps of those who veer from or merely stumble on the path to social-justice enlightenment. It is the full-time job of any American with a public presence to bow down before the identity cult. Professional athletes have mutated overnight into a congeries of Kaepernicks. As for the public, 62 percent of all Americans, according to a poll by the CATO Institute, now say they’re afraid to voice their political views lest they be punished professionally.

Leading media organizations, as they did from the start, lend their approval to all of it. After months of defending chaos in the streets as “mostly peaceful,” the media elite is openly covering for a movement whose defining features are intimidation and mass violence…..(read the rest, it’s a must.)

M.D. KittleMADISON — Gov. Tony Evers’ incendiary tweets after a police-involved shooting of a black man in Kenosha Sunday was like lighting the fuse of a bomb, conservative lawmakers say.

Now the Democrat is calling the legislature into special session to take up a package of “policing accountability and transparency measures,” a move Republican leadership see as the latest in a long line of Evers’ political stunts.

“One hour after the announcement of the speaker’s task force, Governor Evers releases a Special Session call of the Legislature,” Assembly Speaker Robin Vos (R-Rochester) said in a statement. “When I spoke to Governor Evers on the phone today, I asked him to work with the Legislature in a deliberate and open process through the task force.”

“We have an opportunity to bring people together to find solutions. Instead, the governor is choosing to turn to politics again by dictating liberal policies that will only deepen the divisions in our state,” Vos added.

Jacob Blake, 29, was in serious condition Monday after he was shot multiple times while getting into his car during what Kenosha police describe as a domestic incident. Soon after a video partially showing the incident hit social media, Evers hopped on Twitter and fired off sweeping indictments. While he acknowledged he didn’t have all the details, the governor was more than ready to pass judgment.

“[W]hat we know for certain is that he [Blake] is not the first Black man or person to have been shot or injured or mercilessly killed at the hands of individuals in law enforcement in our state or our country,” Evers wrote.

Kenosha erupted in violence — or “unrest,” as corporate media tends to define riots.

On Monday, protesters set some 50 cars on fire in a nearby car lot, burned a few city garbage trucks, and damaged several public buildings, including the public library and the Dinosaur Discovery Museum and a charter school. They also attacked police, reportedly hitting an officer in the head with a brick and knocking him down. That incident, too, was caught on video.

Evers was forced to call in the National Guard, with more protests planned for Madison.

From earlier in the night: One of the many buildings that was set on fire in Kenosha. pic.twitter.com/P6btJ2M01x

Correct: APC’s just rolled up and started to deploy tear gas at the crowd

(Thanks for the terminology, I’m a newbie

A person just launched a glass bottle at the line of officers, prompting them to raise their shields. More bottles (glass and plastic) are being thrown pic.twitter.com/zhVZ8miELS

A rioter poured gasoline on a Kenosha garbage truck and set it on fire. pic.twitter.com/sjf7A6np03

HOLY SH*#: while interviewing this #BLM rioter in Kinosha he pulls out a real pistol and points it at my camera while explaining what we would do to cops if they rolled up on us right now

It’s been a while since I had a gun pointed at me even if it was just to make a point pic.twitter.com/hjQqO9Ccbb