These same cretins are censoring the President, suspended major newspapers and pundits who don’t tow the leftwing, racist, totalitarian line.

The tweets are running the asylum.

The venom, vitriol and, in some cases, vows to help Joe Biden across the finish line in next month’s presidential election continue to live online as the company earlier this week decided to censor The New York Post’s revelations about Hunter Biden’s emails to a consultant for the Ukrainian energy company Burisma.

Twitter’s senior executives have a long history of anti-Trump hatred, a Post review of dozens of accounts of top employees found.

“GET HIM OUT,” posted a senior site reliability engineer on Aug. 18. “What a f–king baboon.”

One manager with almost nine years on the job said he was quite keen to watch Biden “crush [Trump] in the election” and that he hoped the president would “be utterly humiliated while also suffering greatly from #COVID19.” In another post he fantasized about the president being put on a ventilator.

He calls Trump “a f–king idiot” and the voters who elected him — “hysterically f–king stupid people.”

At the same time the employee has been a consistent cheerleader of his company’s efforts to rein in the president on the platform and curb the spread of “misinformation.”

“I’m really proud of how quickly we’ve worked to make this possible for the US elections,” he wrote.

Others publicly wish the president harm.

One Twitter engineering manager said Trump should “die in a fire” in a January 2017 tweet. A year later, he rang in the new year by saying “Happy 2018! Donald Trump is dead!” 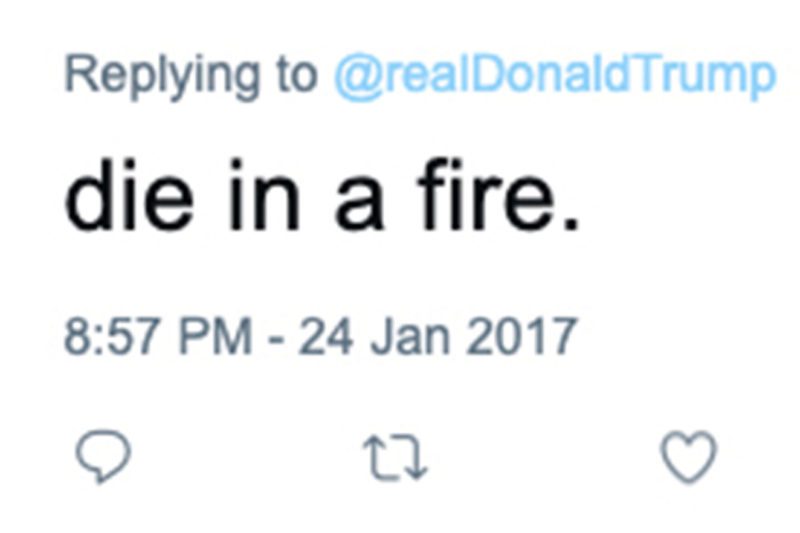 None of these comments have ever been flagged by Twitter or been subject to any other form of official sanction, even as the social-media giant dishes out discipline to others for sharing legitimate news stories that might hurt Biden. The company finally ordered the vicious tweet to be deleted on May 29 — years after being posted.

A consistent theme among employees is a desire to see Trump defeated.

A talent brand program manager cried after Trump was elected president and publicly vowed to oppose him.

A global project manager with more than a decade on the job posted proudly that he was phone banking for Biden.