The more material we see off Biden’s laptop, the more we understand just how deep and far-reaching the corruption of the Biden criminal syndicate. 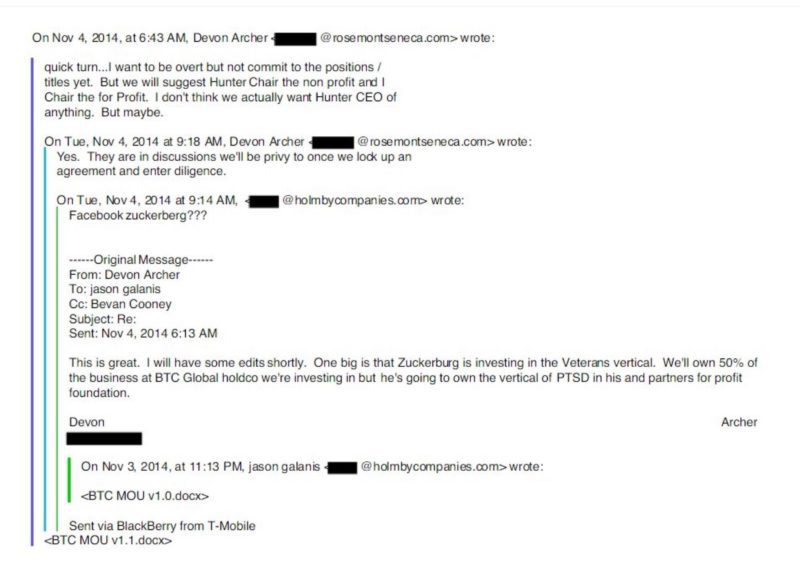 Major U.S. media outlets are living in an alternate fantasy world in which the Biden scandal is a ‘miasma’ meant to confuse and mislead gullible Americans.

It’s hard to read Anne Applebaum’s recent article on the Hunter Biden scandal at The Atlantic without guffawing at the outlandishness of her argument, which is that the whole thing amounts to a shadowy “psy-op” that’s too complicated to understand—a “miasma” conjured up by unreliable Fox News characters trying to create a “foggy world in which misdeeds might have taken place, and in which corruption might have happened.”

Applebaum’s approach is emblematic of the mainstream media’s collective refusal to cover the Hunter Biden story. She spends zero time discussing the actual facts that have come to light through the reporting of the New York Post and a handful of other news outlets, and instead opens her essay with a lengthy anecdote about herself that serves as an ad hominem attack on a reporter she dislikes.

We are meant to understand that this reporter, Matthew Tyrmand, is a creep, not a real journalist, and not to be trusted. For this reason, Applebaum tells us, you can ignore the trove of emails Tyrmand got from an erstwhile business partner of Hunter Biden’s that implicates former Vice President Joe Biden in foreign influence-peddling schemes similar to those uncovered by the Post.

The idea is to disparage the source of the information rather than grapple with what the information reveals. This of course has been the media’s posture toward the Post’s reporting from the outset: pay no mind to the laptop or the emails, uniformly referred to as “documents of questionable provenance,” because it all came from Rudy Giuliani and Steve Bannon, and they aren’t trustworthy. Real journalists, you see, only investigate and report on information that’s verified and trustworthy — you know, like the Steele dossier.

Hence Applebaum makes no mention of Tony Bobulinski, Hunter’s former business partner who came forward last week claiming he met with Joe Biden about China, that Biden is indeed “the big guy” referenced in an email about a proposed equity split in a deal with CEFC China Energy, a Shanghai-based conglomerate. She makes no mention of the text messages between Bobulinski and James Gilliar, another Hunter associate, that clearly show the deal was an influence-peddling scheme that relied on the Biden name. She makes no mention of a recent Senate report detailing millions in payments from CEFC to a company controlled by Hunter and James Biden, Joe’s brother.

All of this, writes Applebaum, is just noise. Smart people who “live outside the Fox News bubble” do not “need to learn any of this stuff” — it’s all just a vague conspiracy theory meant to rile up the unwashed rubes. Pay it no mind.

You might expect this from a writer whose latest book is about how she lost all her friends because they went crazy — a writer, that is, whose elite sense of European morality led her to the conclusion that Roger Scruton was a fascist for supporting Brexit but the arrest of Roman Polanski for raping a drugged 13-year-old was “outrageous.” Yet Applebaum’s aggressive incuriosity about the Hunter Biden story is typical of top writers and reporters at America’s most prestigious outlets.

As Matt Taibbi noted last week, the dogged refusal of the mainstream press to cover the story, together with Twitter and Facebook’s decision to block access to the Post’s reporting, might prove to be a bigger scandal than whatever Hunter and his dad were up to in China. Information about the Biden scandal has been so politicized, writes Taibbi, that American audiences can hardly look up anything about Hunter and China without running into “thickets of propagandistic contextualizing” — fact-checks and explainers and op-eds that keep readers away from what substantive reporting does exist, lest they come to their own conclusions about the Biden family business.

But suppression and distraction can only go so far, even when big media and big tech join forces. The longer the Hunter Biden story is out there, the more one can see a kind of psychosis developing in the American press. After weeks of insinuating, without evidence, that the Hunter Biden emails are just “Russian disinformation” and therefore not worthy of serious coverage, the media circulated a Reuters report on Monday that Russian President Vladimir Putin said there’s “nothing criminal” about Hunter Biden’s business deals. Apparently, if it comes straight from Putin’s mouth it can’t be disinformation.

The American people are not helpless rubes, and they smell a rat. For as much as big media and big tech are trying to control what audiences see and hear, for as much as they try to keep unwanted or counter-narrative information out of the public square, they can’t quite do it.

Twitter and Facebook’s efforts to suppress the Post’s reporting haven’t stopped the story from spreading. Other outlets, including The Federalist, have picked up the story despite the mainstream media’s ongoing refusal to touch it. Joe Biden felt the need to address the issue in last week’s presidential debate. On Tuesday, Tucker Carlson will devote his entire show — one of the most-watched cable news show in the country — to a lengthy interview with Bobulinksi.

One way or another, information about Hunter Biden’s shady foreign business deals, and Joe Biden’s role in them, is getting out there. That bell can’t be un-rung.

But what the facts eventually reveal is perhaps less consequential than what the media and big tech have already revealed by their reaction to the facts: they don’t care much for them, especially if they’re the wrong kind of facts from the wrong kind of people—the sort of people, dear reader, who might be able to pull the wool over your eyes, but would never fool someone as smart as Anne Applebaum.