Trump vanquished the Islamic State, the democrats resurrected it.

Following the August 26, 2021 suicide bombing at the Kabul international airport – which killed 13 U.S. servicemen and more than 100 Afghans and wounded hundreds more, including 18 U.S. military personnel and several members of the Afghan Taliban – the Islamic State Khorasan Province (ISKP) claimed the attack, reporting the number of victims as “more than 160,” including “more than 20 members of the American forces.” The Islamic State (ISIS) also named the attacker as ‘Abd Al-Rahman Al-Logari, presumably a native of Afghanistan’s Logar province, and released a photo of the bomber posing against an ISIS banner, wearing a suicide vest and carrying a rifle.

After the attack and the ISIS claim of responsibility, ISIS supporters widely celebrated the bombing with posters praising “The Blessed Kabul Operation.” Multiple pro-ISIS media groups and supporters released posters in Arabic, English, Farsi, Pashto, Urdu, and Hindi mocking the U.S. and President Joe Biden, condemning the Taliban as an apostate group which cooperates with the U.S., and glorifying the attacker as a hero and martyr.

The following is a sampling of the posters, classified by theme:

On August 27, the Al-‘Adiyat Foundation released a poster with the hashtag #Joy_of_the_Supporters, congratulating ISIS leader Abu Ibrahim Al-Hashemi on the Kabul attack. The caption reads: “We congratulate the Commander of the Believers, leader of the battalions of the mujahideen, the humiliator of the nation of the Cross, Sheikh Abu Ibrahim Al-Hashemi Al-Qurashi, on the blessed Afghanistan operation. We ask Allah to let him capture lands and the hearts of the people.”

Several pro-ISIS outlets viewed the bombing as an ISIS victory over the U.S. Others threatened to carry out further attacks against the U.S., in Afghanistan and elsewhere, and vowed that the U.S. will never defeat ISIS. Some mocked President Biden for weeping in a press conference on the Kabul attack.

A poster released on August 27 by ISIS supporter Majza’ah Al-Qurashi shows the ISIS banner flying above the American flag atop the White House, which had been lowered to half-mast following the attack. The caption reads: “Banners of unbelief were lowered, bringing them regret afterwards.”

A poster released the same day by the Al-‘Adiyat Foundation, in Arabic and English versions, shows a fighter wearing a suicide vest. Beneath this is a quote from a 2016 speech by slain ISIS spokesman Abu Muhammad Al-‘Adnani, vowing that ISIS will defeat the U.S.: “Do not be hasty, America. The war is not over yet and you are not victorious […] Wait! Our swords are not yet dull, our arms not yet tired, our will not yet waned, and we are not bored nor weakened. Rather, by the Grace of Allah, we are many [times] stronger than we were at the beginning of your war, o America! By the Grace of Allah, we grow stronger with every passing day while you grow weaker […]” 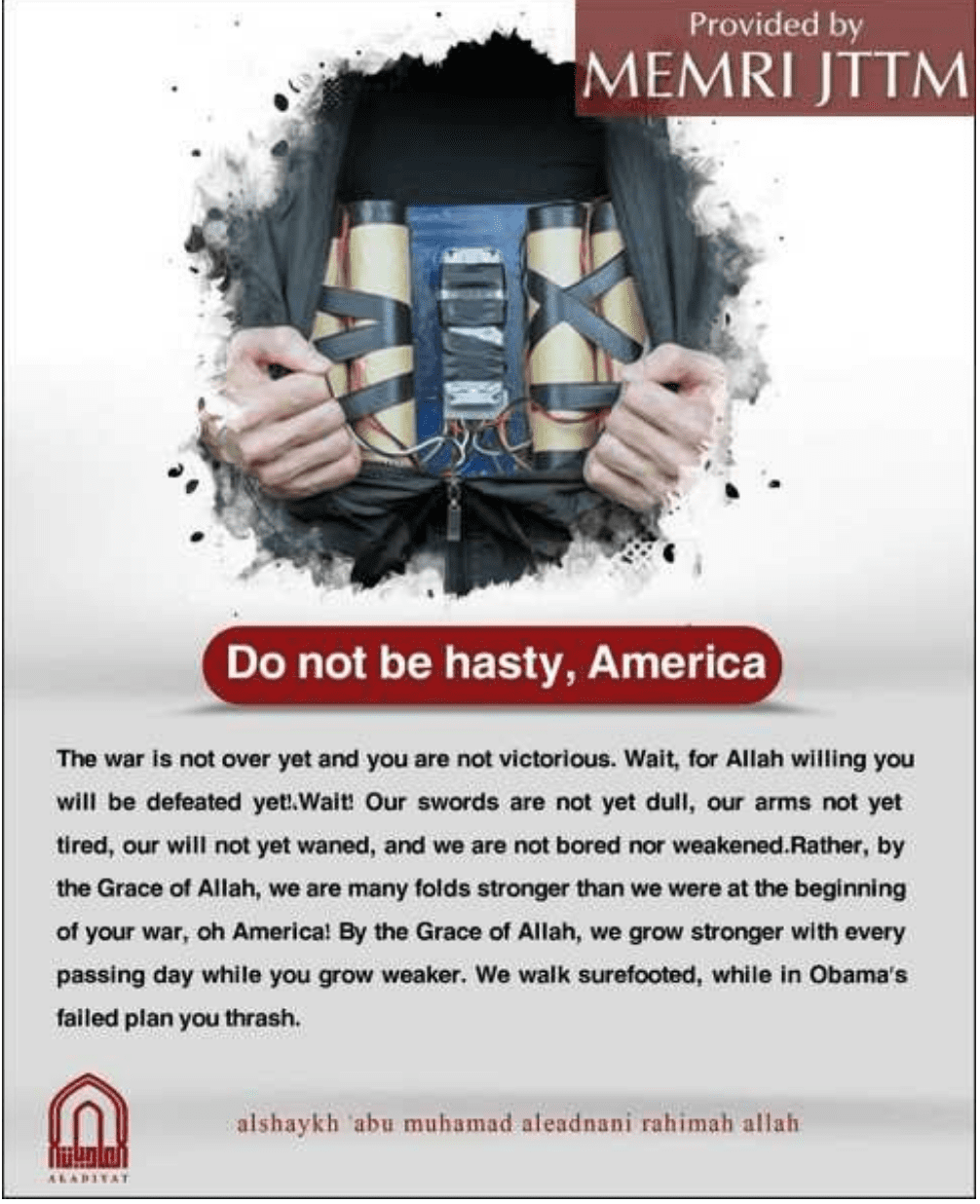 A poster released by the Al-Murhafat Foundation, also on August 27, captioned “Khorasan, Graveyard of the Crusaders,” depicts the ISIS bomber, a map of Afghanistan, a burning U.S. flag, and American soldiers taking cover. Celebrating the reported “160 killed and wounded,” it also contains a phrase taken from the official ISIS claim of the attack: “The Crusaders and their helpers should know that the soldiers of the Caliphate continue their warfare until Allah concludes a matter that has been preordained [i.e. Islam’s victory over its enemies].” 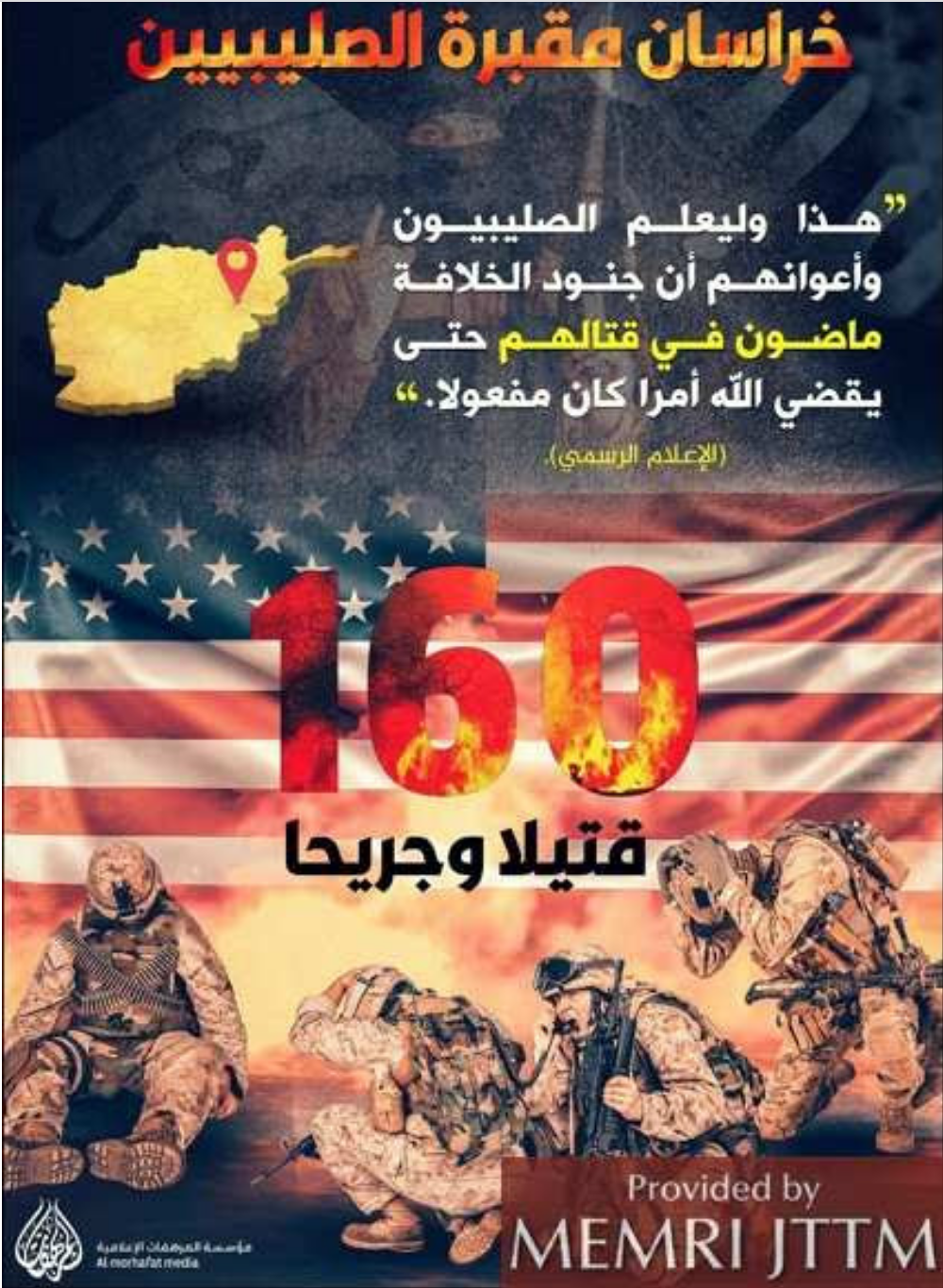 A poster released August 27 by the Sarh Al-Khilafah Foundation depicts a U.S. soldier screaming. The caption contrasts ISIS with the Afghan Taliban, declaring that ISIS remains committed to its principles, while the Taliban has abandoned them, and vows that the U.S. will never defeat ISIS: “Allah Akbar and all glory to Allah. May Allah reward you, o soldiers of the Caliphate. May Allah reward you, you who terrorize the enemies and break the prestige of the protector of the Cross […] Know, o protector of the Cross, that your fabled [might] has collapsed under our feet since you set foot in the land of Iraq and we drove you out of it, banished and defeated […] You will never gain victory over us […] The war between us will never end. This is only a small part of the horror that awaits you; what is coming will be more violent and cause more bitter torment.

Another Sarh Al-Khilafah poster, released on August 28, also condemned the Taliban while threatening the U.S. Depicting wounded U.S. soldiers with flames behind them, its caption declares: “Know that America’s defeat is brought about by fighting her, not by promising not to infringe on her interests. The lions of the Caliphate made America’s day black in Kabul, after [the Americans] thought they were safe [because] the Taliban had promised to protect them […] For some time now we have not heard of the killing of a single American barbarian in Afghanistan. Today the soldiers of the Caliphate brought glad tidings, made the taghout [literally false deity, a reference to rulers who govern by manmade law] of America weep, and lowered its flag. We threaten America with more [attacks] in Kabul and elsewhere […]” 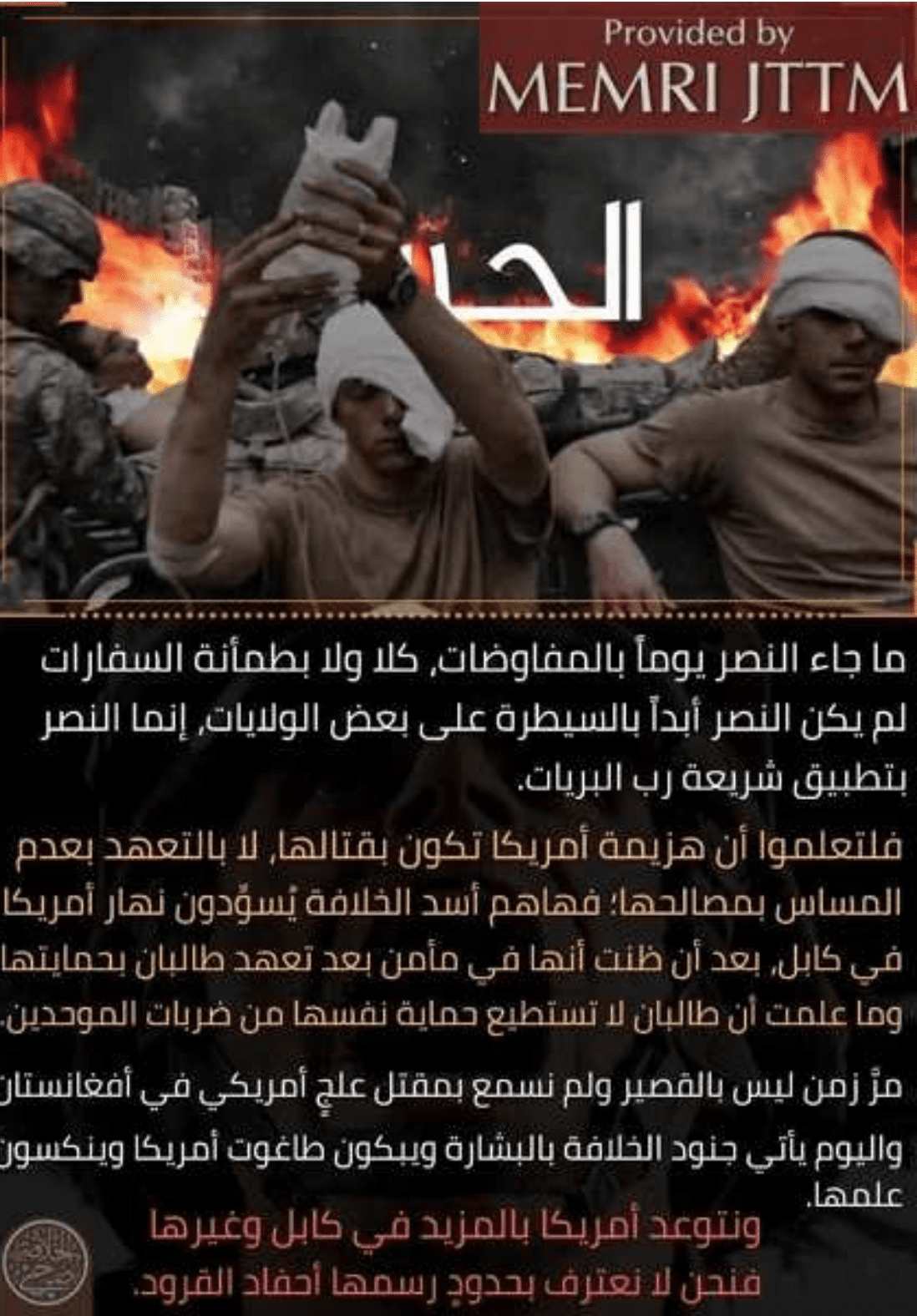