Violent Antisemitism was on full display today at the anti Israel BDS rally Saturday May 15th in Toronto. There were calls to "kill Jews" and some even praised Hitler. https://t.co/0mhbFd81XK

There was a time when Canada was perhaps the safest country in the world for Jews outside of Israel. Those days are long gone. The police lost control of this protest. As a result, many pro-Jewish counter-demonstrators were assaulted. Watch the vicious beating below. And check out the heinous images below as well.

Jews assaulted during a pro-Israel protest in Toronto – watch

Several pro-Israel protesters were violently assaulted and injured by pro-Palestinian protesters at a counter-demonstration in Toronto on Saturday afternoon.

Video footage on social media filmed close to the site of the demonstration at Nathan Philips Square in downtown Toronto showed a gang of pro-Palestinian demonstrators violently attacking an elderly man. A number of them were masked.

More footage. The man had to go get treated at the hospital. Will update as I get more information. pic.twitter.com/vFn9tCALj0

According to the Centre for Israel and Jewish Affairs, “a group of protestors bearing a Palestinian flag swarmed and brutally assaulted a small number of pro-Israel demonstrators.”

CIJA said that antisemitic statements were voiced by the perpetrators during the assault, according to witnesses.
At the time, dozens of pro-Israel activists were demonstrating near a crowd of several thousand pro-Palestinian supporters who were protesting against Israel’s military operation in the Gaza Strip during the last week.
“We condemn in the strongest terms these brazen acts of assault, intimidation and hate targeting members of Toronto’s Jewish community and supporters of Israel,” said CIJA following the incident.
“There is absolutely no justification for political violence in the streets of Toronto, whatever one’s cause may be. To put it bluntly: Those who hate Israel so much that it inspires them to egg and assault their fellow Canadians aren’t just a threat to Jews. They threaten the very fabric of Canadian society.”
CIJA said that the assault on Saturday was “the latest in a series of alarming incidents over the past week that make it clear anti-Israel activists are seeking to use the current violence in the Middle East as an excuse to target Toronto’s Jewish community for intimidation and hate.”

Is this Canada? Hate speech at Toronto's City Hall by Palestinian protestors. Is this whats become of our city streets? Antisemitism. Hate. Calls for Genocide. Have authorities lost control? ⁦@JohnTory⁩ pic.twitter.com/XCV0YOzwsm

Vile antisemitism, hate and incitement on full display at tonight’s anti-Israel rally in downtown Toronto. We at @CanadianFSWC are deeply disturbed by reports of violent assaults on pro-Israel demonstrators leading to a number of arrests. We are closely monitoring the situation. pic.twitter.com/BJXCIHGeQz

Thousands of people gathered for a vocal but relatively peaceful protest at Nathan Philips Square in response to the ongoing Palestinian-Israeli conflict.

A heavy police presence was on hand for what they estimated to be a gathering of between 2,500 to 5,000 people.

19:12 EST , Toronto Ontario Canada !!
Live now from the mass protest in Toronto , Nathan Phillips Square. People from all backgrounds and ethnicities have gathered to voice their solidarity with Palestine !!! #GazaUnderAttack#SaveSheikhJarrah pic.twitter.com/eYcBOyQLPf 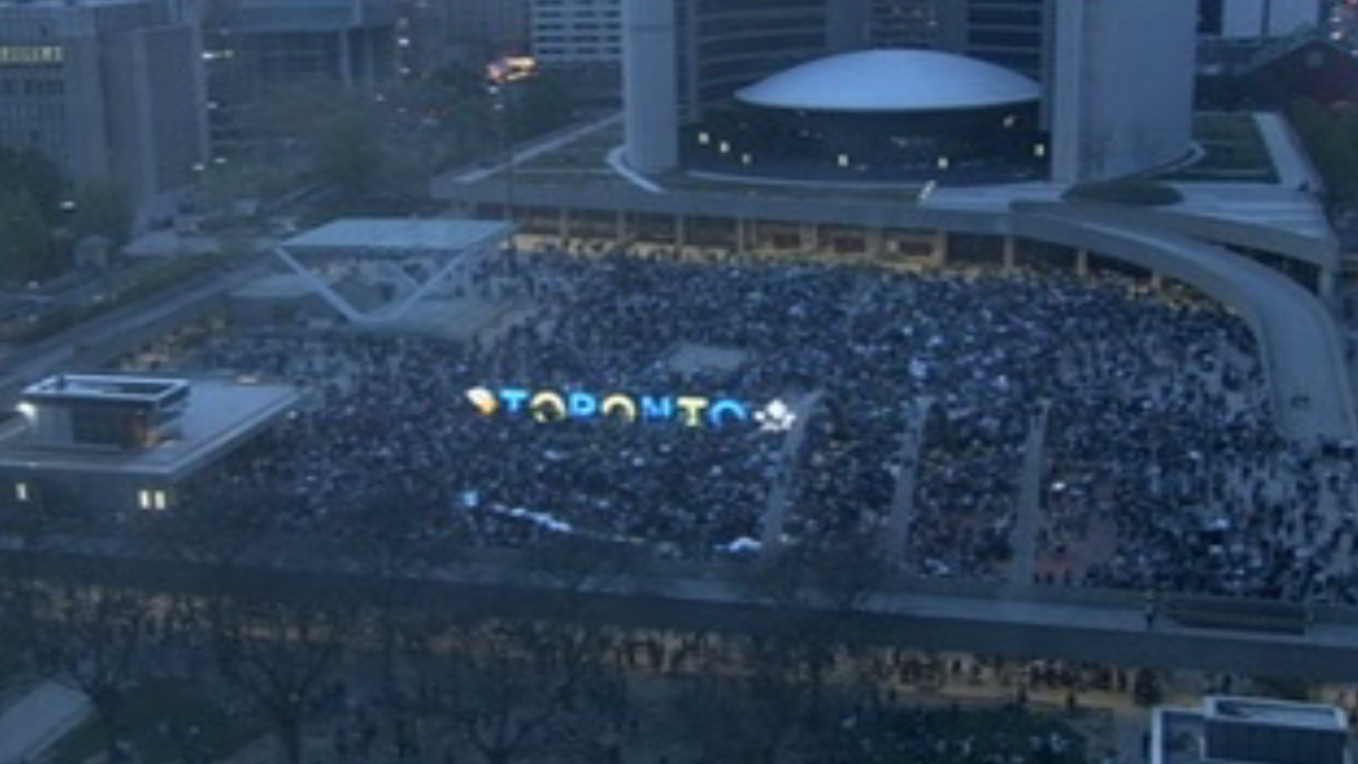 There appeared to be a smaller group of counter-protesters at the same event, showing support for Israel. However, they dispersed as the crowd of pro-Palestinian demonstrators closed in around them, separated only by police.

There is no word if any arrests were made in relation to the event, but police say attendees and organizers will be subjected to charges for violating stay-at-home orders that prevent large outdoor gatherings. They add that even if charges aren’t issued at the scene, they can be laid at a later date.

The protest was organized by the Palestinian Youth Movement, which called for similar demonstrations in over 25 North American cities this weekend including Los Angeles, Boston, and Philadelphia.

Thousands of people shut down traffic on a major thoroughfare in west Los Angeles as they marched two miles from outside the federal building to the Israeli consulate. The protesters waved signs that said “free Palestine” and shouted “long live intifada,” or uprising.

In San Francisco, a raucous crowd banged drums and yelled “Palestine will be free” as they marched across the Mission district to Dolores Park.

The protests were stoked by five days of mayhem that left at least 145 Palestinians dead in Gaza and eight dead on the Israeli side. The violence, set off by Hamas firing a rocket into Israel on Monday, came after weeks of mounting tensions and heavy-handed Israeli measures in contested Jerusalem.

Israel stepped up its assault and slammed the Gaza Strip with airstrikes Saturday, in a dramatic escalation that included bombing the home of a senior Hamas leader, killing a family of 10 in a refugee camp and destroying a building that house the offices of The Associated Press and other media.

Israeli warplanes then struck several buildings and roads in a vital part of Gaza City early Sunday, leaving at least two dead and wounding as many as 25 others – including women and children.

According to photos circulated by residents and journalists, the airstrikes created a crater that blocked one of the main roads leading to Shifa, the largest hospital in the strip.