The take-away from the these election fraud hearings is: Trump won.

ARIZONA HEARING: 11,326 voters NOT on voter rolls on November 7, but WERE on the voter roll on December 4, and were marked a VOTED in November 3 election.

ARIZONA HEARING: 74,243 mail in ballots with no record of the county sending.

"The last time the anti-virus was updated on these systems was the date that the Dominion software was installed on the systems. That happens to be August of 2019."

W/out anti-virus hackers can get easy access, expert says pic.twitter.com/UCWEa8GTp0

If you're missing the Arizona Senate hearing on the Maricopa County election audit, here's a brief recap: Basically they cheated their asses off.

AZ Audit Team: “There Was a Breach of Computer Systems During the 2020 Election – High Vulnerability for Internet Computer Hack (VIDEO)

Doug Logan the CEO of Cyber Ninjas described how there were several ballot boxes with duplicated ballots!

This was a powerful segment from Thursday’s hearing. 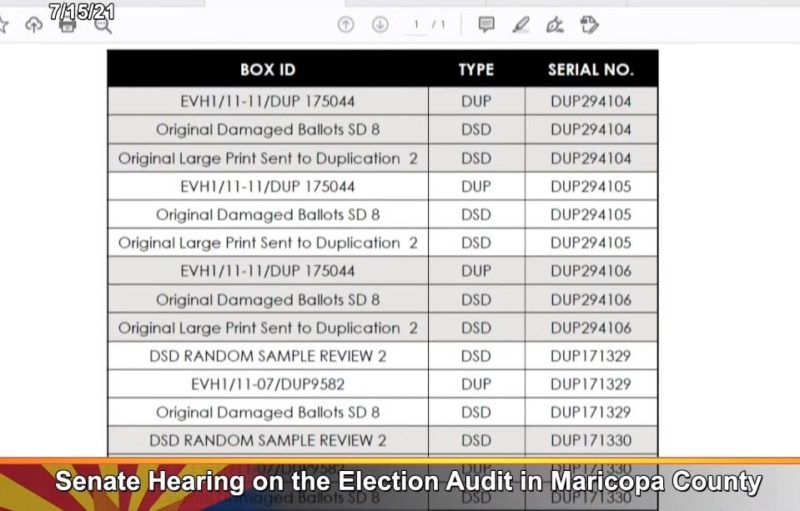 Doug Logan then went on to display examples of several ballots on wrong paper stock.

According to Senate President Karen Fann this may confirm the “Sharpiegate” scandal that was called a scam by the liberal media!

Many have been arguing for months that the election audit in Maricopa County, Arizona, could pave the way for many other states to follow.

Now, we have another big update.

Ken Bennett, Senate liaison to the Maricopa County, Arizona, election audit, revealed there are more than 33,000 ballots from November’s election where voters made no selection for president or at least no votes that were detected by the voting machines.

“There were over 33,000 undervotes,” Bennett told The Western Journal.

There may be, you know, a certain number of people that didn’t want to vote for [Democrat Joe] Biden or [Republican Donald] Trump or [Libertarian Jo] Jorgensen or anyone else, so they may, in fact, be undervotes,” he added.

“But if someone circled their oval or made a check next to it or did something other than getting pixels of blackness inside the oval, almost one percent of the 3.4 million people that voted in Arizona, the machines did not record any vote for president,” he added.

“If we find some people that circled their oval or made a checkmark next to it, not every one of those is probably going to be for Trump or not everyone is going to be for Biden. So will it make a difference in the outcome? Maybe, maybe not.”

According to the Maricopa County recorder’s office, the number of undervotes in November’s election was 8,475 within its jurisdiction.

Maricopa County, which encompasses the Phoenix metropolitan area, makes up over 60 percent of the state’s population, but apparently only accounted for about 25 percent of the over 33,000 undervote ballots.

Bennett noted just how narrow Biden’s win over Trump was in Arizona: Just 0.3 percent, or approximately 10,500 votes, made the difference.

Maricopa County was the only county in the state to flip from red to blue from 2016 to 2020.

”You got 3.4 ballots, but the machines only read a little bit less than that and votes. So if you were either the winner or especially the loser in a race that was decided by two out of 800 votes, I think one of the first things you’d want to do is make sure that every one of those one percent of the ballots” was reviewed, he said.

“I mean, this is a race that was decided by three-tenths of one percent. And so you would probably want to make sure that the election department had done a perfect job seeing if all the votes were counted, especially when one percent of the ballots supposedly weren’t counted for any ballot for president by the machines.”

“But when you’ve got a race that was essentially, not essentially, it was literally as far as the percentage, two out of 800 is the same exact percentage as the margin of victory, which was 10,000 to 3.4 million,” it deserves close scrutiny, he argued.

Maricopa County has completed the hand counting of 2,089,563 ballots.