Georgia officials awarded a contract for 30,000 new voting machines to Dominion in late 2019 “scrapping the state’s 17-year-old electronic voting equipment and replacing it with touchscreens.” Press reports at that time said the existing 17 year-old ES&S Georgia voting systems were malfunctioning but S&S offered upgrades for years. One of Dominion’s lobbyists, Jared Thomas, has worked on Kemp’s political campaigns since 2002……

Dominion Voting Systems should be investigated over a lucrative Georgia contract that was awarded to the election systems maker.

Every business person knows to be suspicious of the lowest bidder, here Dominion was the EXTREME low bidder for Georgia. With an announced GA budget allocation of $150 million Dominion came in at a suspect $107 million and as the below evaluation sheet shows, DECEPTIVELY did not answer question 1 – request for resumes and organizational structure. While ES&S scored highest on quality and security, rookie Raffensberger simply chose the cheapest. 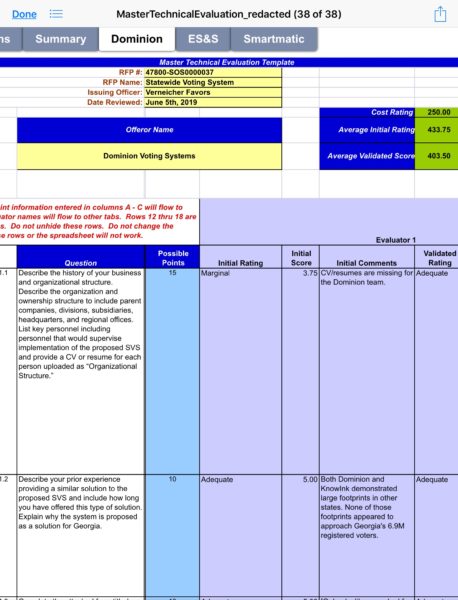 “There should be an investigation, a thorough criminal investigation, frankly, of everyone involved in acquiring the Dominion [Voting] System for the state of Georgia,” Sidney Powell  said on Saturday, adding that there were potential “benefits being paid to family members of those who signed the contract.”

Powell added that her investigation has revealed “money or benefits being paid to family members of those who signed the contract for Georgia.”

“I think there are multiple people in the Secretary of State’s office and others that should be investigated in Georgia for what benefits they might have received for giving Dominion the $100 million, no-bid contract,” Powell said in the interview.

According to a report from the Atlanta Journal-Constitution, a $107 million contract was awarded to switch from Election Systems & Software to Dominion Voting Systems in 2019. 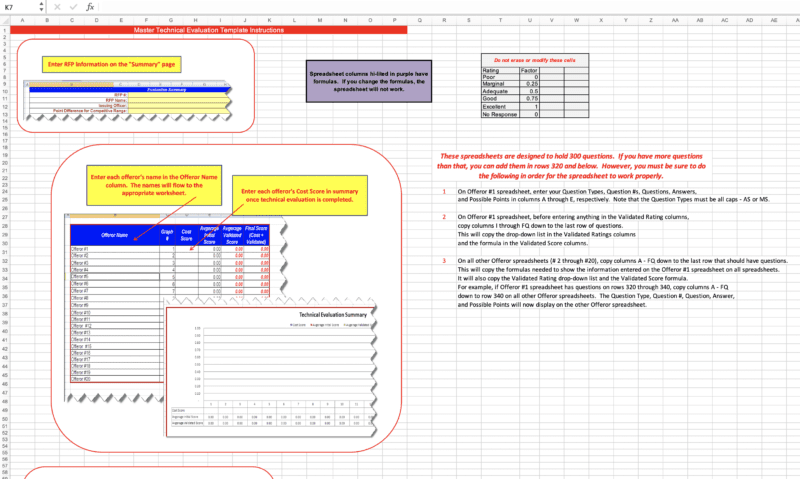 Georgia officials awarded a contract for 30,000 new voting machines to Dominion Voting on Monday, scrapping the state’s 17-year-old electronic voting equipment and replacing it with touchscreens that print out paper ballots.

The announcement is a defining moment for Georgia’s elections, reintroducing paper ballots to Election Day voting for the first time since the state converted to electronic ballots in 2002 following the controversial presidential election between Republican George W. Bush and Democrat Al Gore.

Dominion, a Denver-based company, won the contract in large part because it offered Georgia the lowest-cost system among three companies that submitted bids, according to evaluation score sheets. Though ES&S scored higher on the government’s criteria for a replacement voting system, Dominion came out on top when the price of its system was taken into account.

Election officials now must quickly install the voting technology before its first statewide test during the March 24 presidential preference primary.

The new voting system is expected to be quickly challenged in court by voters who say it remains vulnerable to hacking and tampering, despite the addition of paper ballots.

Like Georgia’s existing machines, voters will make their choices on touchscreen machines. But after picking their candidates, instead of tapping a button that says “cast ballot,” they’ll click on a button that says “print your ballot.” The printer attached to the machine will then print a ballot on a full sheet of paper, which voters can then review for accuracy before inserting into a scanner for tabulation. The paper ballots will be locked in a ballot box for retrieval as needed for audits or recounts.

Georgia voters will soon use a new voting system that combines touchscreens and paper ballots. The ImageCastX by Dominion Voting is a touchscreen that voters will use to choose their candidates. Then their selections will be printed on a paper ballot. Voters can then review their choices and insert their ballots into a scanning machine.

Before the contract was awarded, some voters speculated that the state would continue doing business with its current elections company, ES&S, which has close ties to Gov. Brian Kemp’s administration.

Dominion has connections, as well. One of Dominion’s lobbyists, Jared Thomas, has worked on Kemp’s political campaigns since he first won a state Senate seat in 2002. He also worked previously for Kemp in the Secretary of State’s Office. Another Dominion lobbyist, Barry Herron, was vice president of Diebold Election Systems, the company that originally sold Georgia its electronic voting machines in 2002.

“Elections security is my top priority,” Raffensperger said in a statement. “We look forward to working with national and local elections security experts to institute best practices and continue to safeguard all aspects of physical and cybersecurity in an ever-changing threat environment.”

Critics of these new voting machines, called ballot-marking devices, said they fail to guarantee that votes are counted correctly. They prefer paper ballots filled out with a pen, not by a computer printer.

“Voter intent is best captured by a person marking on paper who they want to vote for,” said Joy Wasson, a concerned Atlanta voter.

>> Related: How to hack elections on Georgia’s electronic voting machines

Printed-out ballots will include the text of voters’ choices, but scanning machines will read computerized bar codes to count ballots.

Dominion said paper ballots will help ensure that computerized tabulations are accurate. Tabulation machines will also create a scanned image of each paper ballot as another way for election officials to verify that they’re correctly counted.

“Election officials and voters alike can be assured they are using the most modern, accessible and security-focused system on the market today, with paper ballots for every vote cast to ease auditing and ensure confidence in results,” Dominion CEO John Poulous said.

Georgia, one of a handful of states that uses uniform voting equipment, will be the first where ballot-marking devices will be rolled out for every Election Day voter. Dominion also provides similar voting systems in states including California, Colorado, Illinois, Michigan, Ohio and Pennsylvania.

Dominion’s election management system will run on Windows 10, mitigating concerns from election security advocates about voting systems that use Windows 7, an operating system that Microsoft will stop supporting with security patches starting in January. The U.S. Election Assistance Commission certified this version of Dominion’s voting system for federal elections in September.

Some of the fiercest opponents of Georgia’s elections had a modest reaction to Dominion’s selection. They were pleased that the contract didn’t go to ES&S but remained wary of computerized voting systems.

“The choice by the state is not as bad is it could have been,” said Lauren Groh-Wargo, the CEO of Fair Fight Action, which is suing the state over problems in the 2018 election. “Today’s announcement, however, does nothing to change the fact that hand-marked paper ballots are more secure than elections by machines.”

Democrats who were critical of Republicans’ votes this year to buy new voting machines were also relatively subdued Monday.

“We have seen how fragile our digital voting system is. The replacement of ES&S is a critical step toward creating greater transparency and security in our elections,” said state Sen. Gloria Butler, a Democrat from Stone Mountain. “I cannot overemphasize the importance of providing complete public education about the new machines. There needs to be sufficient time for voters to see, touch and operate the machines.”

During the fall election, some voters reported that Georgia’s old touchscreens recorded their ballots incorrectly. Voting equipment broke down. And the Georgia Supreme Court is reviewing a case alleging that tens of thousands of votes vanished in the race for lieutenant governor between Republican Geoff Duncan and Democrat Sarah Riggs Amico.

Voting integrity advocates urged state legislators to switch to paper ballots filled in with a pen rather than by a computer, but lawmakers said machine-marked ballots would be more accurate, familiar and accessible to voters with disabilities.

The General Assembly passed a bill this year that called for the state to replace its aging voting system with technology that creates a paper-trail backup. Legislators appropriated $150 million for the new voting system, launching the competitive bidding process that ended with Monday’s contract award for Dominion.

Dominion’s $107 million, 10-year voting system comes in lower than the state’s budgeted amount. The state can renew the contract for an additional 10 years afterward. The initial cost of the contract will be $89 million.

The new voting system will see its first trial run in November during local elections in up to six counties before it’s used statewide in the presidential primary the following spring.