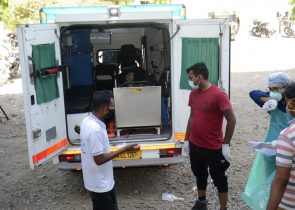 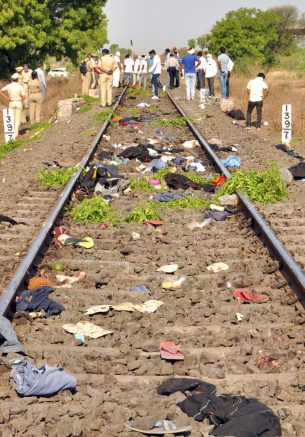 Clothes and footwear of migrant workers lay strewn on a railway track after a train accident in Aurangabad, in the western Indian state of Maharashtra, Friday, May 8, 2020. A train in India on Friday plowed through a group of migrant workers who fell asleep on the tracks after walking back home from a coronavirus lockdown, killing 15, the Railways Ministry said. (AP Photo)

16 migrant workers were killed by a train in India after reportedly falling asleep on the tracks.

Police confirmed the death toll Friday and said at least four members of the group managed to escape with minor injuries.

Authorities said the driver saw the group and attempted to stop the train, but was unable to do so in time.

“The migrants were unfortunately run over by a goods carrier train at about 5:15 in the morning, one of these people is injured and in the hospital,” announced Mokshada Patil, Superintendent of Police for the Aurangabad District. “We are questioning four eyewitnesses for details, they are in shock.”

According to reports, thousands of migrants who have recently lost their jobs due to the pandemic have been walking home along the tracks as public transportation has been suspended under lockdown orders.

Prime Minister Narendra Modi said he’s “extremely anguished by the loss of lives” and has ordered an investigation into the incident.

RELATED: No warning, no escape as deadly gas swept through an Indian village