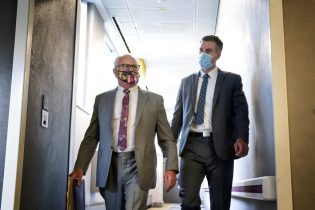 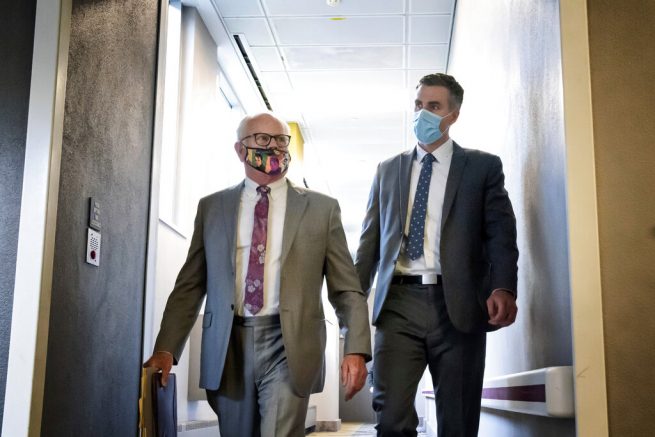 Former Minneapolis police officer Thomas Lane, right, walks out of the Hennepin County Public Safety Facility on Monday afternoon June 20, 2020, in Minneapolis with his attorney, Earl Gray, after a hearing. Lane is one of four former officers charged in the death of George Floyd. (Glen Stubbe/Star Tribune via AP)

Transcripts from George Floyd’s arrest are released to the public. The transcripts released this week are from the body cam videos of Officers Thomas Lane and J. Alexande Kueng who were both involved in Floyd’s killing.

This provides the most detailed account of the May 25, 2020 incident in which Floyd was killed in custody while Officer Derek Chauvin held his knee to Floyd’s neck.

The transcripts were made public as a part of Officer Lane’s request to have the case against him dismissed. The evidence paints Officer Chauvin in a negative light by revealing his dismissal of Floyd’s concerns for his safety.

Floyd: My face is getting it bad.

Lane: Here, should we get his legs up, or is this good?

Lane: Should we roll him on his side?

Chauvin: No, he’s staying put where we got him.

Lane: Okay. I just worry about the excited delirium or whatever.

Chauvin: Well that’s why we have the ambulance coming.

And at one point when Floyd said “I can’t breathe” and then said “they’re going to kill me,” Officer Derek Chauvin responded with “then stop talking…stop yelling…it takes a heck of a lot of oxygen to talk.”

Officer Lane’s attorney, Earl Gray, argues his client was a rookie and there is not probable cause to charge him. Gray has submitted the actual body cam videos as well, though this has not been made public yet.

RELATED: Pelosi refuses to apologize for saying GOP is trying to get away with murder of George Floyd