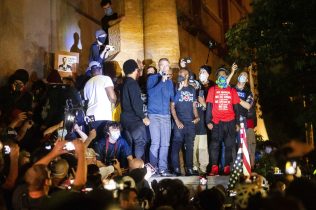 The Portland City Council allegedly approved a bill to ban communication between federal and local law enforcement within the city.

Officials voted Wednesday to prohibit the federal agents deployed to Portland by the president from communicating with local police.

The resolution comes amid an uptick in violence throughout the city, following the reaction to the death of George Floyd in May and now the federal crackdown on the unrest.

President Trump said he had ”no choice,” but to send the federal agents in response to the destruction of national monuments in major cities like Portland.

#WATCH #LIVE Pres. @realDonaldTrump and AG Barr talk on ‘Operation Legend’ and combating crime in U.S. cities.@POTUS says he'll be sending troops and other feds to cities like to Chicago to quell the ongoing violence.https://t.co/BmVTamaH6G

Meanwhile, police declared another riot in the city just outside the federal courthouse. The chaos started overnight Wednesday with protesters calling for federal agents to leave the city.

Mayor Ted Wheeler came out among the crowd in support of their message and protested alongside the people. Matters took a turn for the worse, however, with Wheeler being heckled. At times he was even seen scuffling with protesters who were booing and throwing objects like water bottles at him.

When asked about abolishing the police, Mayor Wheeler doubled down against the protesters by saying he couldn’t commit to doing so.