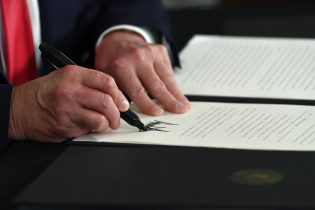 On Saturday, he signed a payroll tax initiative, which will defer payroll tax to those making less than $100,000 a year until the end of 2020.

The president has renewed supplemental unemployment benefits at $400 a week. This new amount came in just below the previous $600 extra, which Americans were receiving before the enhance benefits expired earlier this month.

He also provided assistance to renters by imposing a partial moratorium on evictions and suspended mandatory student loan payments through the end of the year.

The president has expressed he had to step in because Democrats in Congress have not stepped up to the plate.

“Democrats have refused these offers,” said President Trump. “What they really want is bailout money for states that are run by Democrat governors and mayors, which have been run very badly for many, many years.”

Democrats have refused these offers." pic.twitter.com/4IRyWgtUhc

He added that if Democrats got their way, they would crash the stock market.