AMID the global crisis of the Covid-19 pandemic, constraints on citizens’ liberties and economic carnage, the Great Barrington Declaration has caused epic controversy. Campaigners against lockdown are derided as cranks and conspiracy theorists, in contrast to ‘the science’ and compassion of the interventionists. But now the alliance of professional and political orthodoxy is presenting a conspiracy theory of its own.

Resistance to the Great Barrington Declaration is intense. The original signatories, Martin Kulldorff of Harvard, Jay Bhattachaya of Stanford and Sunetra Gupta of Oxford University, are highly esteemed medical scientists. They propose shielding of the vulnerable while allowing herd immunity to develop naturalistically. However, Gabriel Scally, a member of the British government’s SAGE committee, dismissed them as ‘fringe experts’.

Scally disparages the declaration on the basis of a minor left-wing website, which portrayed it as a scheme of misanthropic motives. The launch was hosted by the American Institute of Economic Research (AIER). Founded in 1933, this think-tank is supported by Charles Koch, one of the brothers whose wealth has kept American academic conservatism alive in a hostile environment. It has been very critical of the anti-capitalist climate change movement and woke ideology.

‘Let’s be clear where the ‘herd immunity’ let-it-rip nonsense that is the Great Barrington ‘big idea’ comes from. It is a product of the US libertarian right. The AIER’s goal is ‘promoting the ideas of pure freedom and private governance’. Covid-19 is their big chance.’

This ‘big chance’, according to the conspiracy theory, will be used to cull the population, and to enrich and empower libertarian extremists. Sounds like a new world order, doesn’t it? This is surely a classic case of projection and lack of insight by the lockdown zealots. The more that we hear from AIER critics, the more it seems that Covid-19 is a tool of the climate alarmists’ agenda.

Political leaders around the world, including Boris Johnson and Democrat presidential challenger Joe Biden, are parroting the slogan ‘Build Back Better’. It’s no secret that this comes from the World Economic Forum, the masters of the universe who feed eco-revolutionary and Marxist activism to undermine the nation state. In the ‘Great Reset’, democratic systems will be overridden by global decree (the ordinary people are too stupid to know what’s good for them). British health minister Matt Hancock promoted the ‘Fourth Industrial Revolution’, another WEF concept.

Absurdly, this is mocked as conspiracy theory. For example, Kevin O’Sullivan, a British TalkRadio station host, said ‘there is no Great Reset…it’s just so ridiculous’. Klaus Schwab, WEF leader, openly talks of exploiting the contrived chaos to create order, often described as the ‘New Normal’. Much of what’s happening today was predicted by Event 201, the desktop exercise by the WEF in 2019. We are rapidly heading towards a technocracy run by an unelected elite, controlling access to banking, travel and employment, and reducing us to digital slaves.

The Great Barrington Declaration has been attacked for insulting the progressive hegemony. As signatures neared two hundred thousand (mostly concerned citizens but also fifteen thousand scientists), Google magically made it disappear. After an outcry it returned, temporarily, but the search results are dominated by scurrilous diatribes against the sponsor and signatories. Reddit banned it from a discussion forum. Because it’s dangerous…

Such censorship is what the Nazis, Stalin and Mao did to suppress science and knowledge. Yet mainstream scientists, politicians and media are content to promote a conspiracy theory against those who do not acquiesce to perhaps the most destructive conspiracy against humanity ever. Meanwhile half a million have signed the Great Barrington Declaration. I urge you to join them. 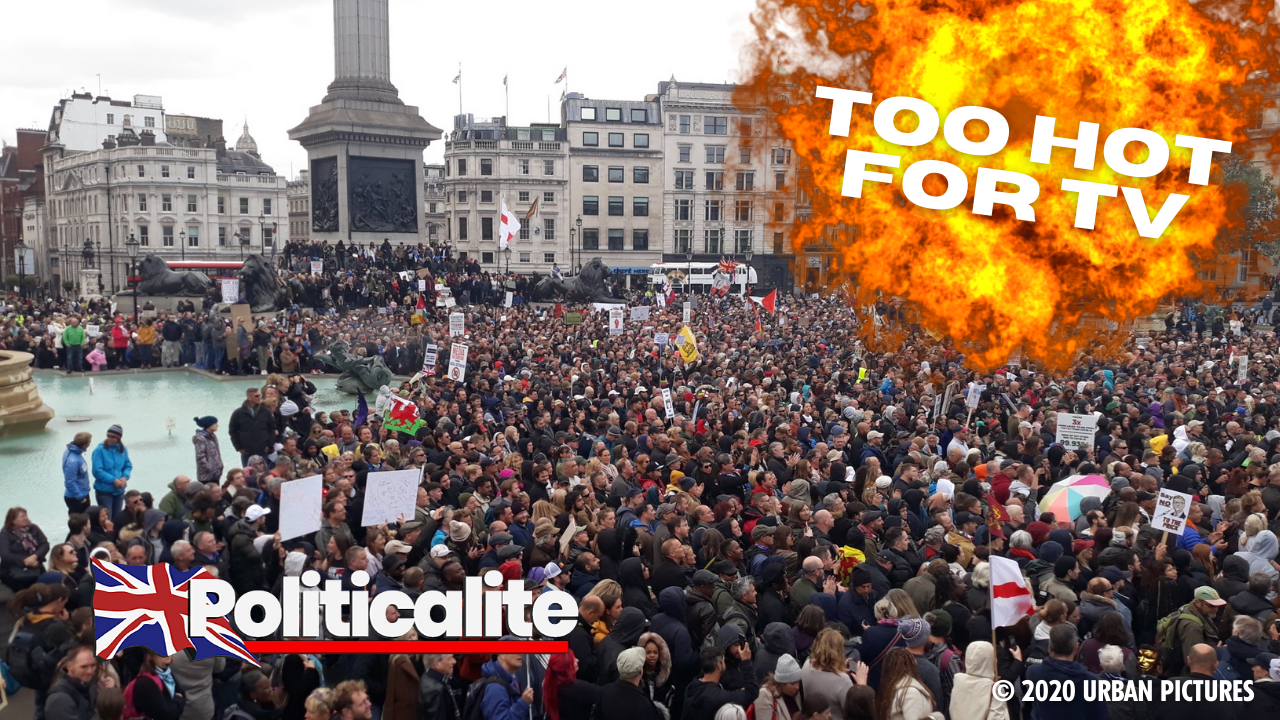 A MASSIVE Anti-Lockdown event has been planned in London this Saturday, Politicalite can reveal.

The event is not linked to any conspiracy theorist or ‘Covid Deniers’ and attendees MUST wear masks and stay at least one metre apart from one another to avoid Met Police shutting the event down.

The event will be a march through Central London starting from Speakers Corner in at 1PM.