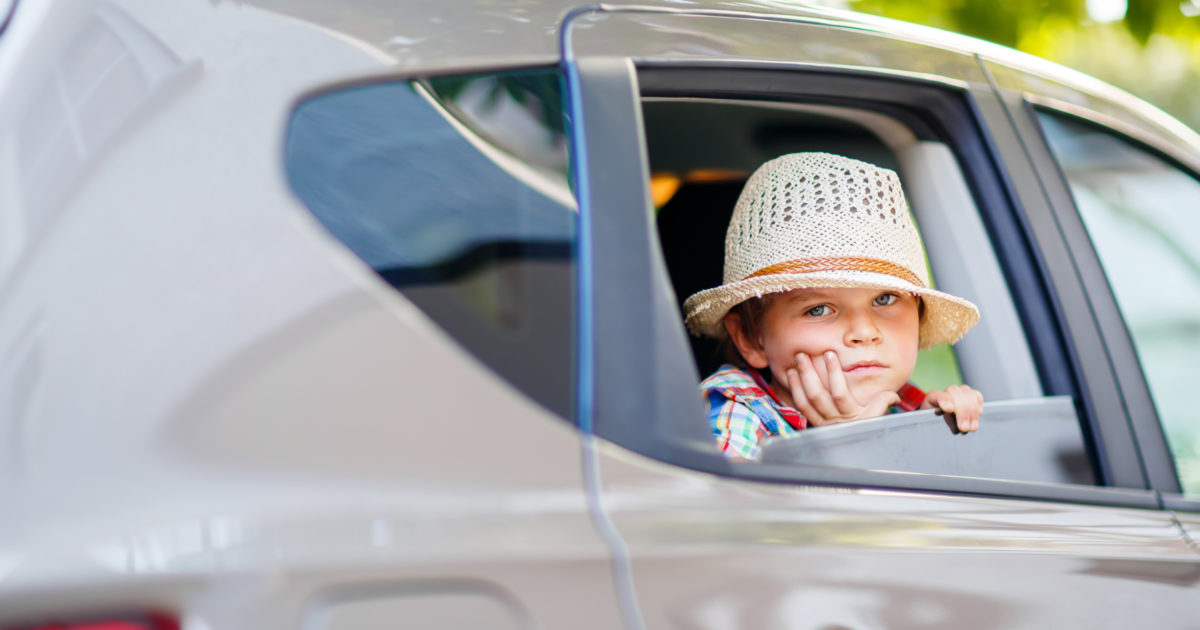 Let your child nap in the car on a cool day while you run into the hardware store and you might have to say goodbye to your dreams of adoption.

That’s what happened to a Colorado couple we’ll call Ted and Jen. (Their real names have been redacted to protect their identity.) Last spring, Ted’s three-year-old fell asleep on his way to Ace Hardware. He parked where he could still see her as he entered the store, and was gone for just 20 minutes. It was 40 degrees outside, according to Jen.

A passerby called the cops, because many people believe that any time kids are alone in a car they are in immediate danger of kidnapping or overheating. The tragic fact is that every year some children do die in cars. But the vast majority are young children who got into cars without their parents realizing it and couldn’t get out, or kids whose parents drove to work and completely forgot about the sleeping child in the back seat. In fact, 4.6 hours is the average time that kids who died in cars were unattended. Children deliberately left in the car for a brief period of time on a temperate day are in very little danger.

When Ted came out of the store, the cop called to the scene said he was going to take the child into custody unless he could reach Ted’s wife to see if she trusted Ted with the girl. Jen told the cop that Ted is a great dad, so Ted was allowed to leave with the child, according to Jen.

But Jen’s heart was breaking already because she knew that this would probably impact the adoption process they were going through. Jen had had a kidney transplant in her 20s. Her daughter was born premature and spent two months in neonatal intensive care. Another pregnancy was not something they could risk. Dearly wanting another child, they had found an adoption agency, passed the home visit, paid $15,000, and were awaiting a child.

When a child services caseworker came to the home two days later, he looked through the kitchen cabinets and refrigerator, and questioned Jen, who could not stop sobbing. (Ted was at work.) According to Jen, the caseworker told her that the child had been in danger of kidnapping during those 20 minutes (actually, stranger kidnappings are exceedingly rare), or choking (the child was safely strapped in her car seat). The caseworker later returned to question Ted.

Ted, a law enforcement officer himself, tried to explain that there is no actual law against letting a child wait in the car in Colorado, and that the girl had been totally fine. But, says Jen, the caseworker told him, “I have to make it a finding, man.” A “finding” means labeling Ted guilty of child neglect and placing his name on the state’s child abuse registry, which is accessible to public agencies, hospitals, case workers, and even through background checks conducted by private employers. In most states, the registration process occurs without any trial, and the burden is on the person named to find a lawyer (if they can afford one) and appeal through their state’s administrative appeal system (good luck with that).

Ted and Jen tried to convince the adoption agency that they still deserved a child. But with this black mark on their record, the agency did not respond warmly. Eventually, Ted filed an appeal and his registration status was expunged. With clearance in hand, Ted and Jen were sure that now they could adopt.

“We found out that expunged doesn’t mean expunged,” says Jen. “Your name stays in the registry. It just says ‘expunged’ on some different screen somewhere.” The couple sought help from the county and state, but though her husband was officially no longer a child abuser, it was impossible to take Ted’s name off the registry. The adoption agency dumped them—and kept their $15,000 deposit.

When Ted and Jen applied to be foster parents, the state turned them down, too.

“They said, you know, maybe we could foster after 2 or 3 or 4 or 5 years had passed, but they’re just making things up as they go along,” says Jen. “And I was like, ‘What if we wanted to foster teenagers? How does this have any effect on our ability foster them?'” After all, teens are allowed to wait in cars. “But if you’re on that registry,” says Jen, “you’re bad.”

The pair are emotionally and financially exhausted. They wish they could just sign a piece of paper saying they will never let a child wait alone in a car again.

“Vague neglect laws give cops and caseworkers more power than the parents themselves to decide what is safe for their own kids,” notes Diane Redleaf, Let Grow’s legal consultant and co-chair of United Family Advocates, which advocates for more legal protections for wrongly accused families. “It is high time we required child protection authorities to bring child abuse or neglect accusations to court for an impartial determination before they are allowed to place anyone on the registry.”

In the end, Ted had to complete a six-month diversion program to get his criminal charge dismissed. Meantime, he was placed on 12 weeks of paid administrative leave while his Internal Affairs department conducted an investigation. He received a formal letter fining him a nominal amount because “getting a child abuse ticket looks bad for our department.”

Jen, a state employee, is herself a mandated reporter—meaning she is required to report any children who seem possibly abused or neglected. Over the course of 10 years, she says, she reported four. Two of the families she thinks she would still report, since the kids were in terrible shape. But now that she has seen what can happen when Child Protective Services gets involved, she regrets involving the other two families, and indeed anyone at all, unless the kids are literally in grave danger.

“The system is built to perpetuate itself,” she says. At her agency, “we get extra funding for extra caseloads,” and she suspects it is the same at CPS.

As for her own future, Jen says she expects she and Ted will never be allowed to adopt. The consequence of one rational decision by a dad will deprive a loving family of a child, and a child of a loving family.