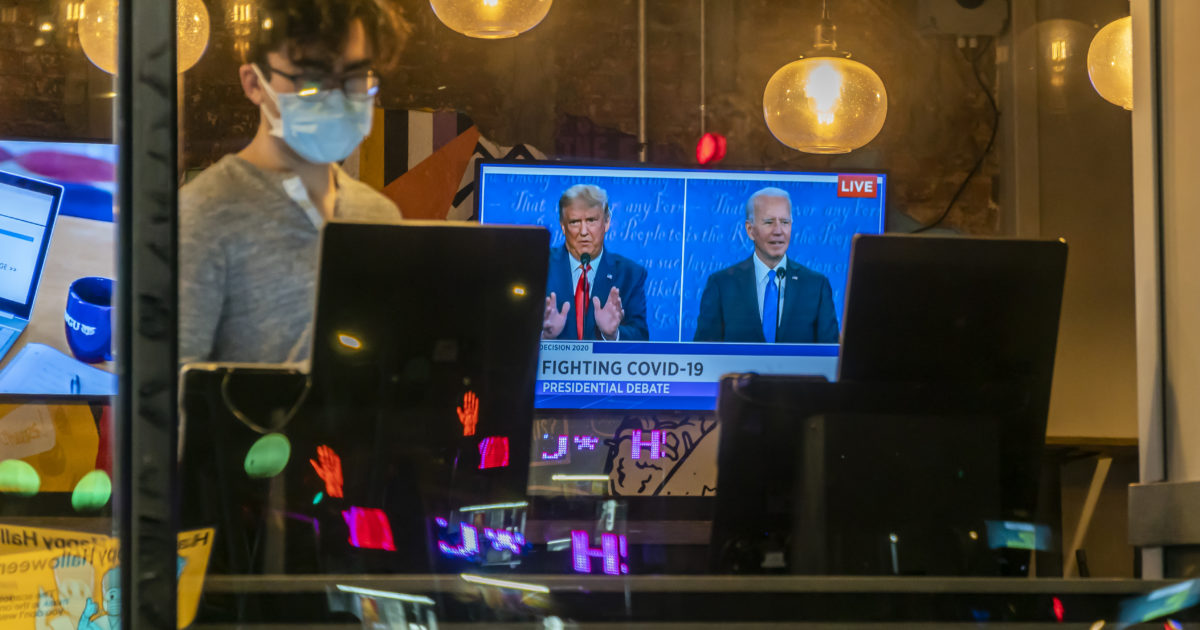 One of the best moments in the year’s final presidential debate came during a moment of relative agreement: Both President Donald Trump and challenger Joe Biden repudiated the long legacy of politicians bragging about locking ever larger numbers of people up.

Despite being a self-declared “law and order” candidate, Trump took Biden to task for the former senator and vice president’s role in passing federal crime legislation that “put tens of thousands of mostly black young men in prison” while bragging about the “criminal justice reform, prison reform” he himself passed (such as 2018’s FIRST STEP Act, which reduced the sentences of thousands of drug offenders). Trump also touted his record on granting clemency and pardons, which is ahead of the numbers that Barack Obama had at the same time in his presidency. While Trump erred in saying that Biden had called young black men “superpredators” back in the 1990s (that was Hillary Clinton), he was right that Biden was—in the words of Reason‘s Justin Monticello—”a leading architect of the modern criminal justice system, contributing to mass incarceration and the police misconduct that people are protesting today.”

Biden, who has run away from his indisputable tough-on-crime track record, stressed the leniency displayed by the federal government when he was vice president, noting several times the “38,000 prisoners [who] were released from federal prison” during the Obama administration. He even went so far to claim credit for starting the examination of police brutality in the wake of the 2014 police shooting of Michael Brown in Ferguson, Missouri. “We were the ones that put in the legislation saying we could look at pattern and practice of police departments and what they were doing,” he said, while apologizing for past legislation he supported. “We began the process, we lost an election, that’s why I’m running to win back that election and change his terrible policy.”

An ardent drug warrior who helped create the office of the drug czar, called for the death penalty for various drug-trafficking crimes, and is still resistant to legalization of marijuana, Biden nonetheless said that there should be no federal mandatory minimum sentences for drug offenses (he misspoke, calling them “minimum mandatories”) and that “no one should be going to jail because they have a drug problem.” Biden’s reforms are heavy on dubious policies such as drug courts and mandatory treatment for arrested users, but they are less brutal than his past stances. For his part—and despite his longstanding criticism of recreational drug use, including drinking alcohol—Donald Trump has long supported legislation that would turn control over marijuana back to the states.

If such moments of broad agreement were rare last night, they are no less welcome. The U.S. incarceration rate (federal, state, and local) peaked in 2008, but America still boasts the world’s highest incarceration rate (about 665 people per 100,000 population), higher than such open-air prisons as Cuba (510) and Turkmenistan (583). So there is still much to be done.

In the final days of a remarkably mean-spirited presidential race, it’s good to see the Republican and Democratic nominees touting the number of people they’ve let out of jail rather than beating their chests about how many bad guys they’ve put away. Major political change tends to happen when both parties have reached a consensus, not when they’re fighting against one another. This is true of positive changes (civil rights legislation passed with large majorities) and negative ones (as Biden himself noted, much of the tough-on-crime legislation he pushed had nearly unaminous support). Last night’s rough agreement on criminal justice reform is a sign that the carceral state is on the wane.