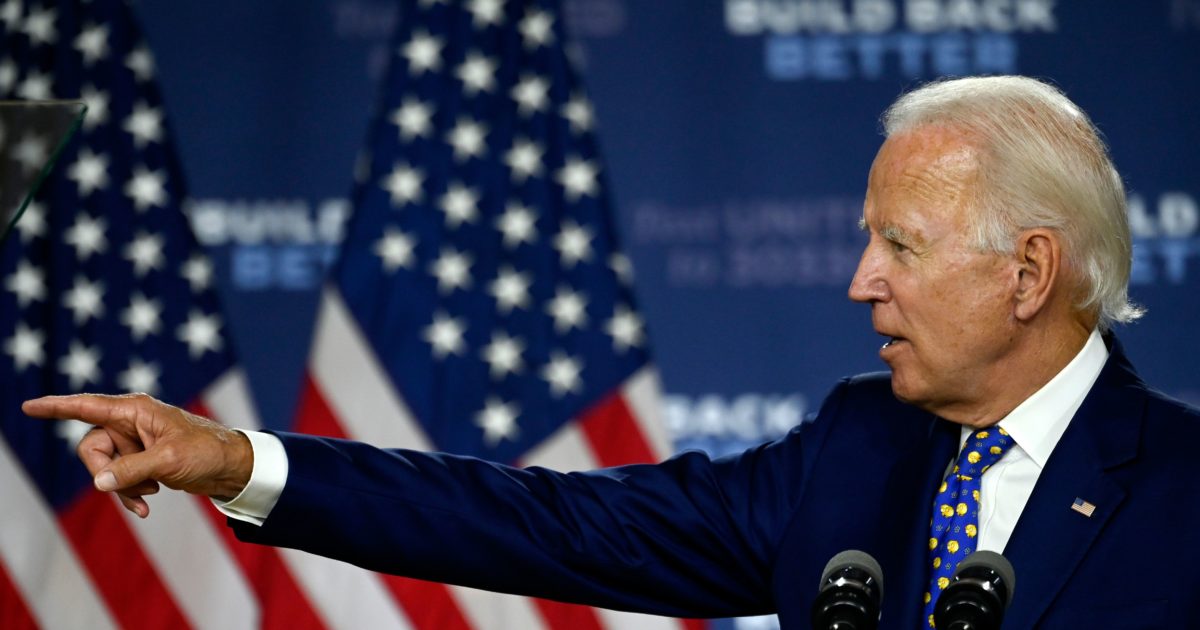 Democratic presidential candidate Joe Biden appeared to indicate last week that he would lift tariffs imposed by President Donald Trump. But his position may be murkier than it initially seemed.

Here’s what happened. During an interview with NPR’s Lulu Garcia-Navarro, Biden was asked whether he would “keep the tariffs” Trump imposed on Chinese-made goods. “No,” Biden responded, before adding that “we’re going after China in the wrong way.”

Lifting Trump’s tariffs would be a great idea, and Biden is absolutely correct that the tariffs have been ineffective in getting China to change its behavior. American importers, businesses, and consumers are paying an estimated $57 billion annually in higher costs due to the tariffs, and the only concession the trade war has won for the U.S. is a minor trade pact that neither Trump nor China’s leaders seem too keen on actually respecting.

So a promise to scrap the tariffs sounds like great news. Naturally, Biden’s campaign has pushed back against the idea that Biden meant to say what he said.

Biden aide: “His position is unchanged: he would re-evaluate the tariffs upon taking office. He was obviously responding to the notion that ‘Trump’s stance is a good one to counter China’s influence,'”

Meanwhile, the Trump campaign has seized on the moment to declare that Biden “would surrender to China on trade.”

The story is complicated by the fact that Garcia-Navarro’s question was not very precise, and further complicated by Biden’s inarticulate response. Here’s the transcript of their exchange (emphasis mine):

LULU GARCIA-NAVARRO: President Trump is not the first president to say China is ripping off the United States. President Obama made similar complaints. Some have said Trump’s stance is a good one to counter China’s influence. Would you keep the tariffs?

JOE BIDEN: Some. Two or three people. Manufacturing has gone in recession. Agriculture lost billions of dollars that taxpayers had to pay.

We’re going after China in the wrong way. China is stealing intellectual property. China is conditioning being able to do business in China based on whether or not you have 51 percent Chinese ownership. That’s got to end.

I’ve spent a fair amount of time when I was vice president with President Xi, because the president wanted me to get to know him. He’s no democrat with a small d at all. But here’s the deal. I made it real clear—

LULU GARCIA-NAVARRO: So if he scraps those tariffs, what do you want in return? Or are you just going to scrap them without any concessions?

And what we have done is we have disarmed ourselves. We make up 25 percent of the world’s economy. But we poked our finger in the eye of all of our allies out there.

The way Trump—the way China will respond is when we gather the rest of the world that in fact [INAUDIBLE] in open trade, and making sure that we’re in a position that the world—that we deal with WHO the right way. In fact, that’s when things began to change. That’s when China—that’s when China’s behavior is going to change.

Biden gets some of the facts right. For example, manufacturing has gone into a recession since Trump took office, and the tariffs likely have contributed to that. Less accurately, he seems to have confused the World Trade Organization (WTO) with the World Health Organization (WHO). Still, if you read between the lines, there are a few worthwhile nuggets hiding in Biden’s word salad. He’s been a longtime advocate for a multinational approach to confronting Beijing: During the Obama administration, Biden was a lead cheerleader for the Trans-Pacific Partnership (TPP), a proposed-but-never-finalized 12-nation trade deal widely viewed as an attempt to contain China. On the campaign trail the past two years, Biden has repeatedly criticized Trump’s go-it-alone approach and the futility of the current administration’s trade war.

But did Biden commit to lifting tariffs without any sort of agreement from China, as both free-traders and the Trump campaign—for very different reasons—might be hoping? Not really.

The Biden campaign did not respond to Reason‘s request that it clarify his remarks.

Unfortunately, Biden has tempered his formerly pro-trade views in an attempt to appeal to the protectionists within his own party and to blue-collar voters seen as essential to Trump’s win in 2016. That might make political sense for Biden, who currently seems to be on track to winning the election, but it is small comfort for anyone who would like to see the next administration adopt a less economically illiterate trade policy.

That goes beyond just the tariff question. The Biden campaign has published a trade policy platform that includes questionable ideas like a mandatory “Buy American” provision that would increase what taxpayers have to pay when the federal government makes purchases. The Biden campaign has also parrotted some of the Trump administration’s misguided talking points about America’s supposed dependence on imported medical goods.

“Instead of providing a constructive alternative to these views in order to appeal to the vast majority of the Americans who would benefit from fewer trade barriers, the Biden campaign seems to be trying to out-Trump Trump in an effort to appease a relative handful of anti-trade extremists,” writes Bryan Riley of the National Taxpayers Union Foundation.

Trump’s trade war with China has been a failure. It shouldn’t be too much to expect Biden to able to say so.