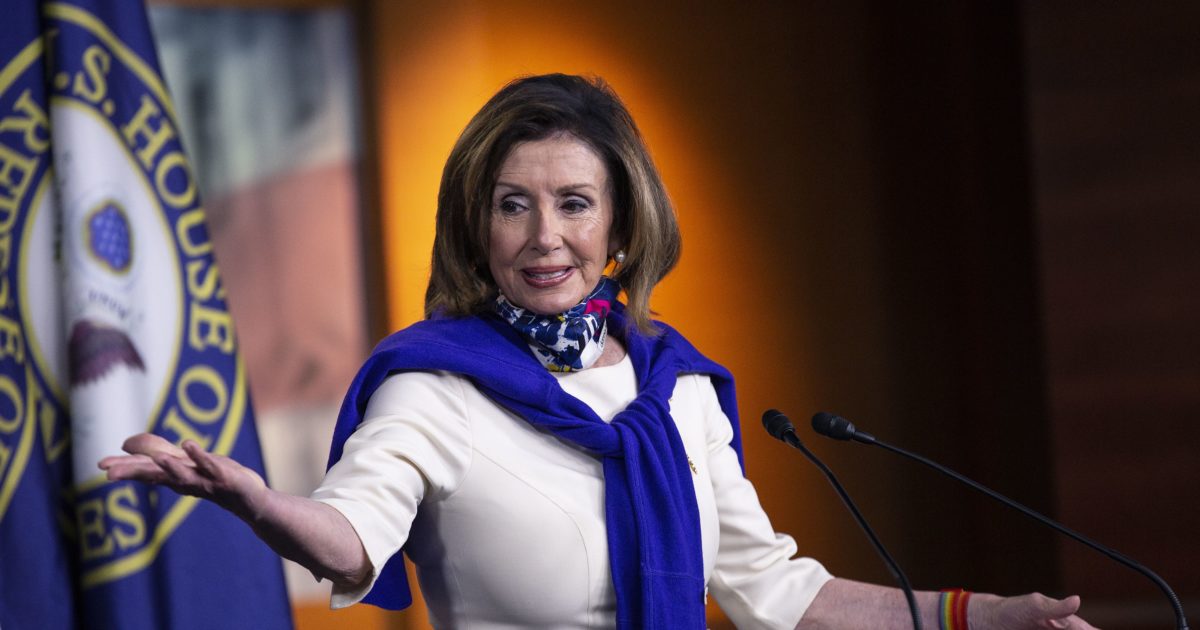 Talks over another coronavirus relief package have stalled following House Speaker Nancy Pelosi’s (D–Calif.) insistence that the White House agree to at least $2 trillion in new spending as a precondition of continued negotiations.

Senate Republicans have introduced a $1 trillion relief bill; a not insubstantial sum that is nevertheless short of the $3.5 trillion measure House Democrats passed back in May.

U.S. Treasury Secretary Steve Mnuchin issued a statement of his own blaming Pelosi, who he says “made clear that she was unwilling to meet to continue negotiations unless we agreed in advance to her proposal, costing at least $2 trillion,” Mnuchin added that “the Administration is willing to move forward with legislation that allows for substantial funds for schools, child care, food, vaccines, hospitals, PPP for small businesses, rental assistance, broadband, airports, state and local government assistance, and liability protection for universities, schools, and businesses.”

Senate Republicans’ $1 trillion proposal includes calls for another round of $1,200 stimulus checks, $150 billion in aid to state and local governments, a $200 weekly unemployment benefit, as well as a few pet defense projects.

Democrats’ $3 trillion proposal would instead provide a $600 unemployment bonus, plus close to $1 trillion in aid to state and local governments. It also includes $175 billion in assistance to homeowners and renters.

President Donald Trump signed an executive memorandum on Saturday that taps $44 billion of already-appropriated disaster relief funding to create a new $400 unemployment bonus, of which $100 would have to be provided by state governments.

Senate Majority Leader Mitch McConnell (R–Ky.) is reportedly urging Democrats and the White House to come to a deal. Up to 20 senate Republicans are reportedly a no vote on any new relief funding, meaning McConnell will need every Democratic vote he can get.

Regardless of what passes, it is remarkable that the lower-bound proposal on the table is a $1 trillion relief effort that comes just months after the passage of the $2.3 trillion CARES Act.

Rideshare giants Uber and Lyft both say they may have to pause service in California due to a court decision from earlier this week requiring them to treat drivers on their platforms as employees.

“If the court doesn’t reconsider, then in California, it’s hard to believe we’ll be able to switch our model to full-time employment quickly,” said Uber CEO Dara Khosrowshahi Wednesday during an MSNBC interview.

An internal Uber assessment found that this would require the company to raise prices by 20-111 percent in California, with less densely populated areas seeing larger price hikes.

Lyft, Uber, and delivery businesses like Doordash and Instacart, are backing a state ballot initiative that would exempt workers using their apps from the requirements of A.B. 5.

New Zealand is reimposing lockdown restrictions in the city of Auckland after a rash of new COVID-19 cases. Most businesses and schools in the city must now close. Restaurants and bars can offer take-out only.

The island nation had gone more than 100 days without any community spread, reports NPR.

The new cases appear to have spread in a workplace setting, reports Science. One New Zealand public health professor speculates the cases are the result of some sort of screening failure at the border.

a comprehensive guide to podcasts pic.twitter.com/wc2ke6ZDx8