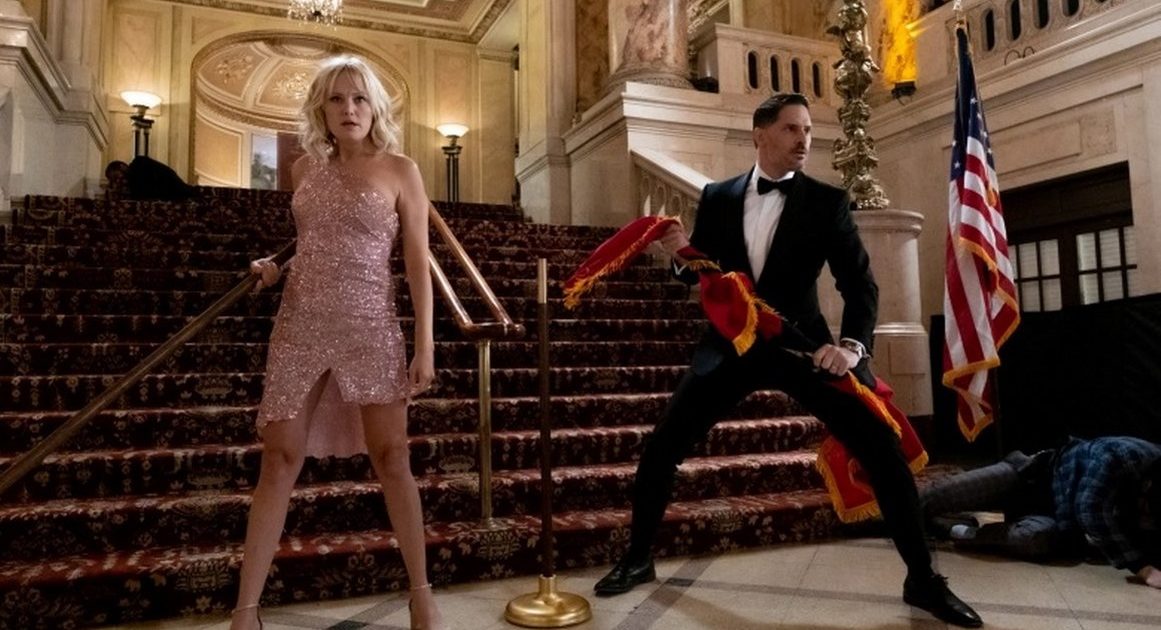 The Sleepover. Available now from Netflix.

Call it my own little bugaboo. But I laughed out loud when Kevin, the lovably loutish 7th-grade-dork protagonist of The Sleepover, learns that his smiley blonde mom is not actually the suburban blond cookie-pusher she appears, but an international-fugitive jewel thief who has been hiding out in the witness protection program, he cuts immediately to the horror-struck chase: “We’re CANADIAN?”

Netflix’s dystopian-family comedy The Sleepover, a daffy cross between the Home Alone movies and the caper flick of your choice, isn’t going to make anybody forget Lucille Ball or Married … With Children. But it’s got some good laughs—mostly, I’m sad to report, not involving Canadians—and holds the saccharine well below the diabetic level. As the dreary summer of 2020 fades and we have to face the most wretched presidential election since—well, since 2016, but still—this may be about the best we can hope for.

The un-June-Cleaver mom in question is Margot, played by a dressed-down Malin Akerman, the wife of reptilian hedge-fund trader Bobby Axelrod on the first three seasons of Billions. Kevin and his sister Clancy call her “boring!”—often—and they may err on the side of generosity: no job, a thoroughly neutered pastry chef for a husband, and she seemingly leaves the house only on days when she’s the volunteer cafeteria monitor at the kids’ school. (One tiny clue that Margot’s not quite the ‘burb Barbie she looks: When she smilingly warns some of the rowdies at school to quiet down or she’ll cut the brakes on their parents’ cars, sending them to a fiery death like pigs screaming in hell.)

But her cover story cracks wide open when some of Margot’s old gangbanger friends snatch her one night and demand that she pull one last job for them. Her kids, naturally, pursue, and lots of knives, bullets, karate kicks and wrecked cars are soon flying through air, all PG-rated but impressively staged. (The scariest stunt: The kids swim in Boston Harbor.)

Akerman plays her role well, if predictably, and that goes also for Ken Marino (Black Monday) as the mighty-thumbed pastry chef dad. And Joe Manganiello does a pleasantly fearsome turn as the gang boss. (The kids would have been even more scared of him if they knew he used to be a werewolf.)

Forget the grown-ups, though. The real strength of The Sleepover is the kids. Kevin and Clancy, played by Disney Channel regulars Maxwell Simkins and Sadie Stanley, are hilariously authentic as children united in loving contempt for their dorky dad and fascist mom.

Kevin in particular is a hoot whenever he opens his mouth—he’s a compulsive and utterly unskilled liar. Instructed to give an oral report on a family member, he breathlessly recounts how his astronaut grandfather learned how to grow crops in his own poop to survive a crash in outer space. When the teacher breaks in to tell him to shut up, he demands an explanation.

“For one thing, it’s the plot of The Martian,” the bored teacher replies. To which Kevin counters, in a tone of sweet reason: “Where do you think they got the idea?”