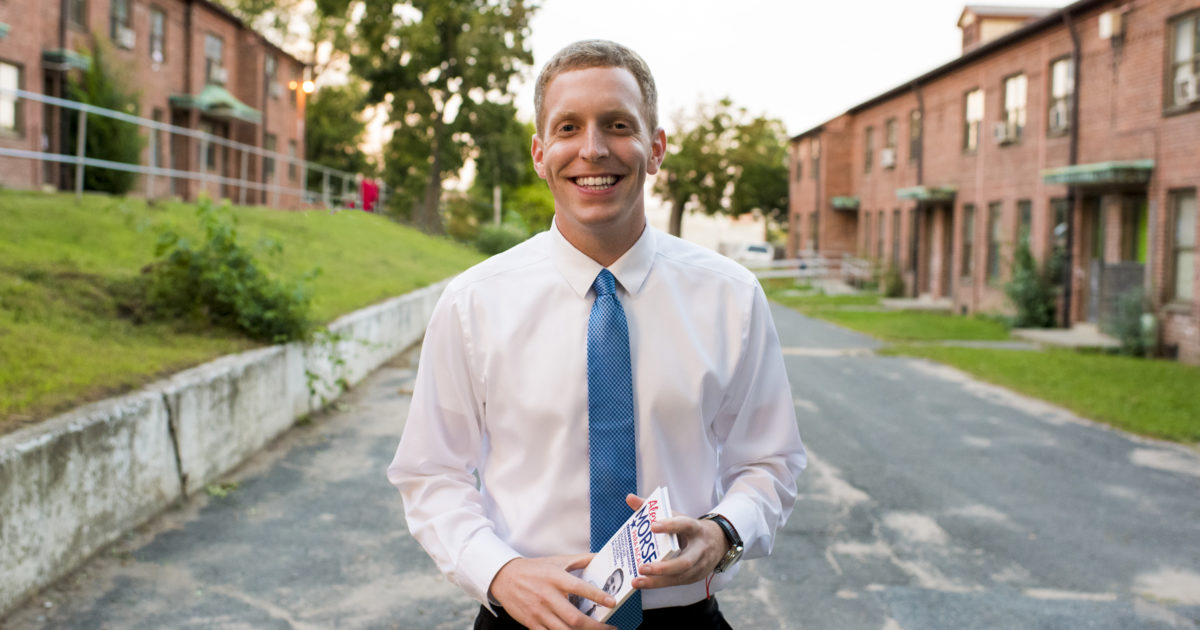 Alex Morse is the 31-year-old mayor of Holyoke, Massachusetts. He is currently running a primary campaign against Rep. Richie Neal (D–Mass.), current chairman of the House Ways and Means Committee, and is backed by the progressive Justice Democrats PAC.

But he will no longer receive support from the College Democrats of the University of Massachusetts at Amherst, who sent him a letter on Thursday disinviting him from all future events. On Sunday, the group issued a public statement accusing Morse—who is gay—of inappropriate sexual behavior with students.

“Mayor Morse has made students uncomfortable and abused his power for sexual relationships,” wrote the College Democrats.

That’s a serious-sounding allegation, and one that undoubtedly carries potential consequences for Morse’s campaign. It’s also much, much weaker than it initially seems. It’s impossible to fully parse the accusations, since the statement discusses them only in vague terms—which is itself a problem. But they appear to rest on the bizarre notion that 18- to 21-year-olds cannot consent to sex with someone who is a decade older and more established than they are.

Morse, who has taught as a lecturer at UMass-Amherst since 2014, rejected the College Democrats’ accusations in a statement, writing: “I want to be very clear about this. I have never, in my entire life, had a non-consensual sexual encounter with anyone.”

But many on the progressive left—especially campus social-justice activist types—cling to an odd definition of consent in which the concept is voided if any party to a sexual encounter later feels conflicted about it, or if the power and privilege differentials of the participants have not been fully worked out ahead of time. This strain of progressivism often follows a believe-all-victims mentality, which does not allow for serious scrutiny of dubious misconduct claims. In keeping with this tradition, many on Twitter called for Morse to be held accountable for wrongdoing.

Others on the left, including The Intercept‘s Glenn Greenwald, pushed back and accused Morse’s detractors of trying to infantilize college students. “There are factions of the liberal-left as obsessed with regulating, controlling & moralizing over the private *consensual* sex lives of adults as the 1980s Moral Majority,” wrote Greenwald.

It’s hard to disagree with Greenwald here. While the lack of specificity makes it impossible to say for certain whether all of Morse’s dealings with students were perfectly benign, the accusations seem to rest upon several faulty premises.

According to The Massachusetts Daily Collegian, members of the College Democrats detailed several complaints in their initial letter to Morse:

The first issue alleges that Morse regularly matched with students on dating apps, including Tinder and Grindr, who were as young as 18 years old. These students included members of the College Democrats of Massachusetts, UMass Amherst Democrats and other groups in the state.

The second issue, “Using College Democrats events to meet college students and add them on Instagram, adding them to his ‘Close Friends’ story and DMing them, both of which have made young college students uncomfortable,” according to the letter.

“We have heard ​countless​ stories of Morse adding students to his ‘Close Friends Story’ and Direct Messaging members of College Democrats on Instagram in a way that makes these students feel pressured to respond due to his status,” the letter read.

The third issue: “Having sexual contact with college students, including at UMass Amherst, where he teaches, and the greater Five College Consortium.”

Let’s take these one by one. First, it is not an “issue” for a 31-year-old to “match” with students “as young as 18 years old” on dating apps. An 18-year-old is not a child. They can vote, fight in war, and consent to sex with other legal adults. (They can’t purchase alcohol, but that law is dumb.) If you’re old enough to be on a dating app, you are capable of consenting to sex with someone who is a decade older.

The social media issue is murkier, since we don’t know exactly what was said. The College Democrats’ letter claims that students were nervous about not returning Morse’s messages because of the power he had to make or break young would-be politicos’ careers, which sounds like an overdramatization even if it contains some truth.

As for the third issue, UMass-Amherst’s policies forbid professors only from dating their own students, not students in general. The letter did not accuse Morse of committing this offense. Nevertheless, the university has launched a sexual harassment investigation into Morse, and administrators said they have no plans to hire him back regardless of the outcome.

“Even if these scenarios are mutually consensual, the pattern of Morse using his platform and taking advantage of his position of power for romantic or sexual gain, specifically toward young students, is unacceptable,” wrote the College Democrats.

But if the students concede that the encounters were actually consensual, they should not suggest otherwise when they describe them elsewhere. Moreover, the continuous references to the students as “young” makes it sound like 18-year-olds are children who can’t think and act for themselves.

It’s possible there’s more to this story, and that new revelations will mean that Morse actually has something to apologize for. But as it currently stands, he looks like the victim of an insinuation campaign premised on the idea that college students have no agency and need constant protection from sexual predation. This idea is a bad one, and has produced several of the more obvious examples of #MeToo overreach.