Some leftists reacted to the murder of a 5-year-old boy in North Carolina by an African-American male by celebrating the brutal killing, with one asserting it was justified payback for the boy’s “white privilege.”

Cannon Hinnant was shot in the head at point blank range for the ‘crime’ of riding his bike on 25-year-old felon Darius Nathaniel Sessoms’ property. His shocking murder was witnessed by a neighbor and Hinnant’s two young sisters.

Mainstream media networks have entirely ignored the story, but it did catch the eye of some Black Lives Matter supporters who openly celebrated Hinnant’s death.

“[I don’t] give a shit he is white it’s time for revenge we tired shit over with now we shooting yall [sic] go cry to you moma [sic],” said one respondent who was later identified as Terrell Kent, a Taco Bell worker from North Carolina. 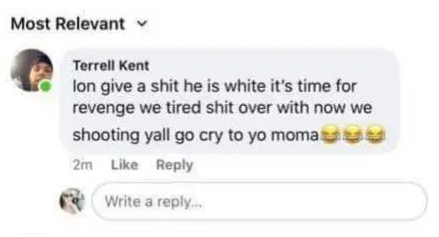 Facebook users then tried to contact Kent’s employer but were apparently unable to do so, with one commenting, “Likely another loser without a job.”

Meanwhile, another individual from San Francisco named Dante Salvador responded to a Wayne Dupree post about the shooting by commenting, “Blew his white privileged brains clean out of his head! #BlackLivesMatter.”

As we previously highlighted, some leftists also celebrated the killing of Jessica Doty Whitaker, the young mother who was shot dead for saying “all lives matter,” with Black Lives Matter proponents flooding her Facebook page to gloat over her murder.

“Racist Rachel is pushing daisies and the streets are a little safer,” said one user called Eric Albany.

My voice is being silenced by free speech-hating Silicon Valley behemoths who want me disappeared forever. It is CRUCIAL that you support me.

Please sign up for the free newsletter here. Donate to me on SubscribeStar here.