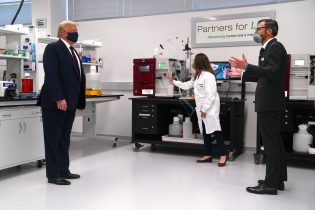 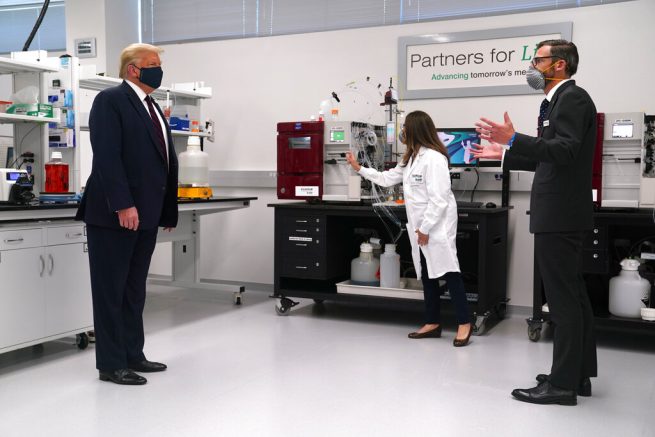 The president made the remarks Monday during a coronavirus briefing at Fujifilm’s Bioprocess Innovation Center in Morrisville, North Carolina. He had been touring the site with HHS Secretary Alex Azar. The duo believes securing more manufacturing capacity will help get a vaccine to Americans “without a day wasted.”

“Under Operation Warp Speed, we’ve shaved years off of the time it takes to develop a vaccine,” said President Trump. “We’ve done it while maintaining the FDA gold standard for safety.”

The president also applauded the Moderna vaccine for recently entering its third and final stage of clinical trials. The New England-based biotech facility is now testing the vaccine on 30,000 volunteers across 30 states as well as Washington, D.C.

Half will receive a placebo and the other half will be given the active vaccine. In an exclusive interview with ABC, Moderna chairman Noubar Afeyan explained more.

“We have a certain number of cases that we need to see in the trial before we can demonstrate whether the vaccine arm gives us more protection than folks not in the vaccine arm of the trial, so we’re talking next year at the earliest,” he stated. “We’re talking late this year, next year before the FDA can make this adjudication.”

President Trump said other vaccine candidates, including Fujifilm’s Novavax are likely to enter phase three in a matter of days.

Over the weekend, Florida, Texas and Arizona all saw a surge in coronavirus cases. The administration was reportedly in constant communication with the state’s leaders and sent resources as soon as they were requested.

As always, President Trump encouraged residents to wear masks, wash hands and maintain social distance. He said if states comply with the most recent guidelines, they should be able to “turn the corner very quickly.”