She would say that wouldn’t she?

Rep. Ilhan Omar, D-Minn., laid out a scathing attack on President Trump’s foreign policy Friday, arguing his Middle East agreements weren’t actually “peace deals” but arms deals that should be reversed by the next administration.

Remember, it was this ISIS sympathizer who asked the judge for leniency in the punishments for American Islamic State recruits. 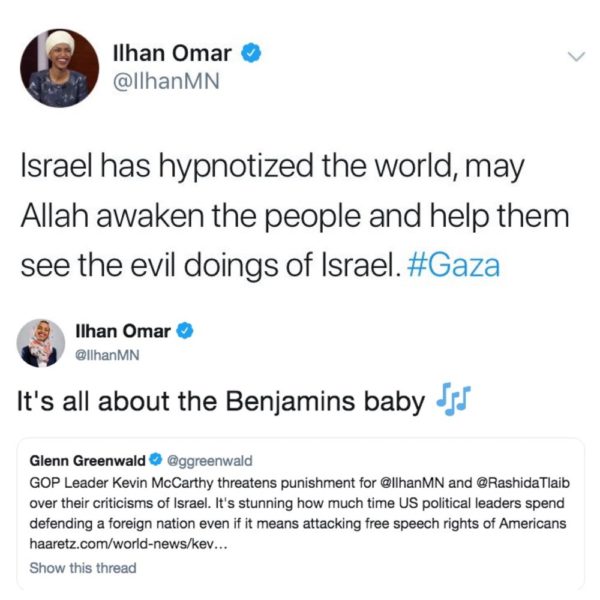 Rep. Ilhan Omar, D-Minn., laid out a scathing attack on President Trump’s foreign policy Friday, arguing his Middle East agreements weren’t actually “peace deals” but arms deals that should be reversed by the next administration.

“The only problem?” she added. “They weren’t peace deals. They’re arms sales to human rights abusers, designed to empower the Gulf States and increase the risk of war with Iran.”

ILHAN OMAR FIRES BACK AT DEM COLLEAGUES FOR URGING MODERATION

Her tweets came after The Nation published an op-ed in which she attacked Trump for working with the UAE, noting the nation has been accused of war crimes in Yemen and “has also been credibly accused of committing war crimes in Libya.” She went on to slam Bahrain as a “brutal dictatorship.”

Many of her criticisms echoed conservative arguments for exiting the Iran nuclear deal, which she lambasted Trump for doing in Friday’s op-ed.

“Nearly every action taken under President Trump has made armed conflict more instead of less likely,” she wrote.

“Trump imposed crippling sanction after crippling sanction on the Iranian people—depriving them of much-needed medical supplies during a pandemic and further tightening the brutal authoritarian regime’s grip on power. He ordered the assassination of an Iranian commander—risking all-out war—earlier this year. As a result of these actions, Iran finally backed out of the nuclear pact that Trump himself had torn up in 2018—and now has 12 times more enriched uranium than would have been permitted under the agreement.”

By contrast, Secretary of State Mike Pompeo has praised the outcome of the Middle East agreements as indicative that former President Obama’s administration was wrong about the destabilizing impact of withdrawing from the Iran deal.

“I remember Secretary Kerry saying that if the nuclear deal was abandoned that Israel would become more isolated when in fact just the opposite has now happened,” he previously told “The Story.”

After decrying the agreements’ impacts on Israel and Palestine, Omar’s op-ed posited that President-elect Biden has “a tremendous opportunity to reverse this.”

“Instead of siding with one group of dictators over another, we should position ourselves at an equal distance from both, allowing ourselves to be honest brokers, protecting our national security and interests while promoting human rights and democracy,” she wrote. “We can hold Iran accountable for its human rights violations while also holding Saudi Arabia, Yemen, and the UAE accountable.”

Meanwhile, Trump has received copious praise by some for his foreign policy. Joining his colleagues in nominating Trump for a peace prize in September, an Australian law professor said the “Trump doctrine” was “extraordinary.”