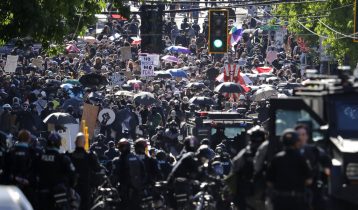 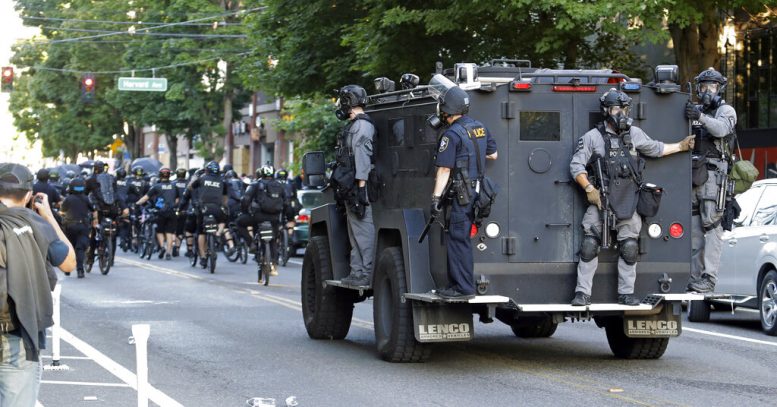 It’s not a peaceful protest in Seattle. The crowd are the aggressors. They set fire to a Starbucks right before this. pic.twitter.com/JVIiCxCPut

This came just one day after a federal judge granted a temporary block, which allowed police to use non-lethal crowd control equipment.

Thousands gathered at the city’s Capitol Hill, where CHOP was previously located, earlier that day. What initially started as a peaceful demonstration to show solidarity with Portland protesters eventually devolved into violence.

“Over 20 officers have been injured, and one went to the hospital for further treatment. Once again, I implore people to come to the city in peace. We support everyone’s First Amendment right to free speech and to assemble in such a way.” – Chief Carmen Best, Seattle Police Department

Crowds reportedly threw rocks and fireworks at police. One officer is currently recovering in the hospital. 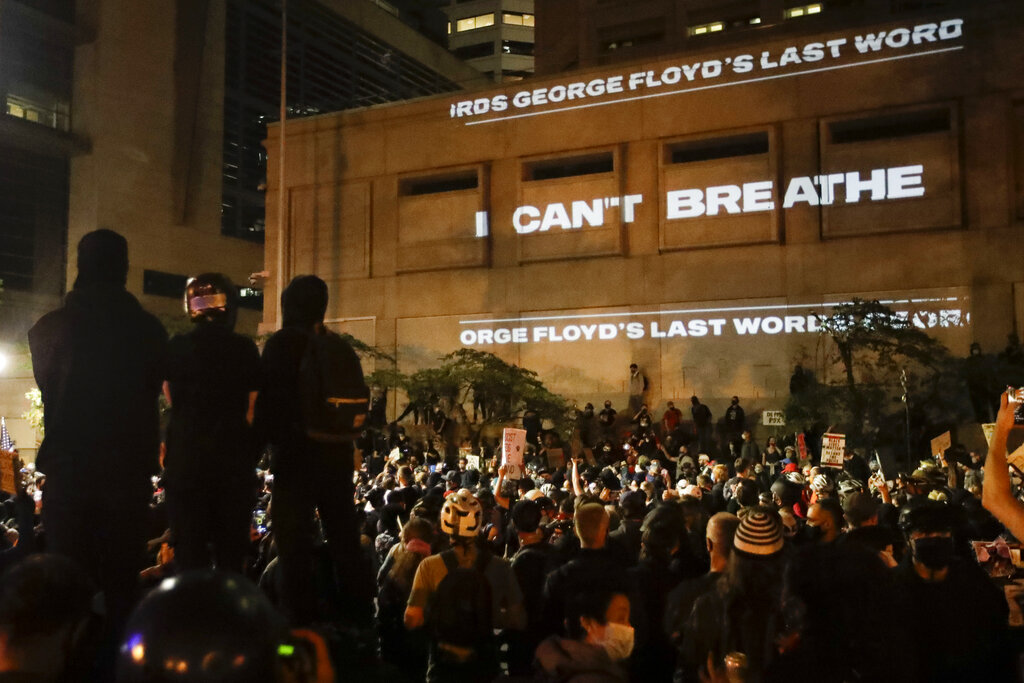 The words “I can’t breathe” are flashed on a wall during a Black Lives Matter protest Saturday, July 25, 2020, in Portland, Ore. (AP Photo/Marcio Jose Sanchez)

Police also declared a riot in Portland, Oregon after protesters tore down a fence surrounding federal property. Thousands gathered for the 59th night in a row Saturday to march on federal courthouse.

I was shot at with pepper rounds tonight by my own country.pic.twitter.com/dksHdc9TNv

The building has been the sight of clashes between protesters and DHS agents for weeks now. Activists have called for the removal of federal agents.

According to police, rioters threw bottles and fireworks at officers, which resulted in several arrests.

“If you want to support Portland, stop the violence, work for peace. Portland police officers and facilities have been threatened. Now, more than ever, Portland police need your support. We want to be with you in the community, working on real relationships that will create change.” – Chief Chuck Lovell, Portland Police Department 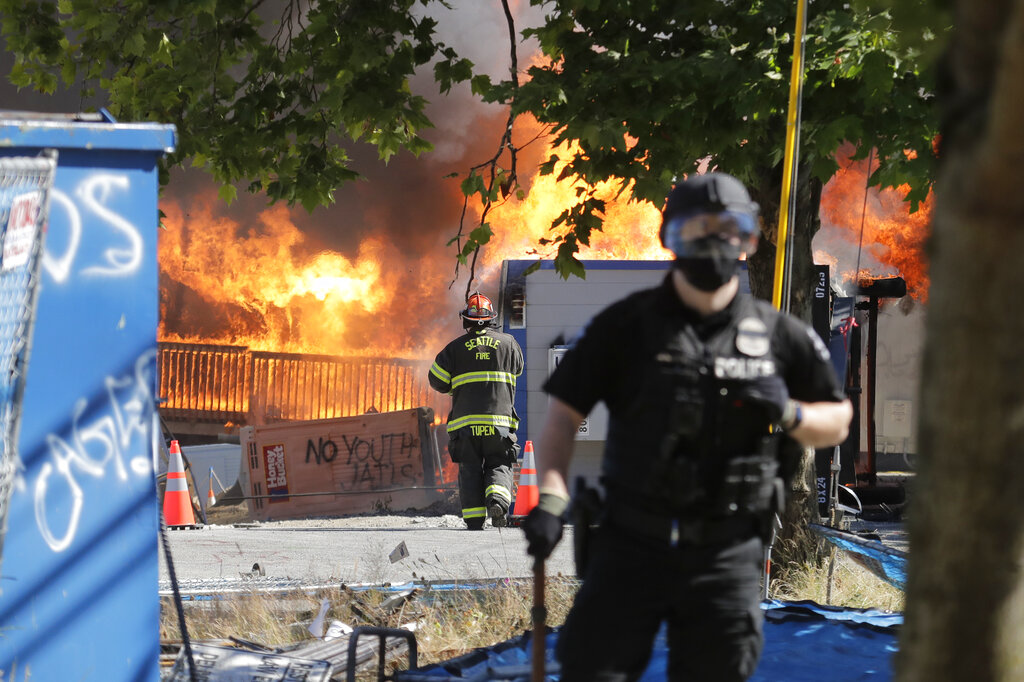 The unrest in Portland reportedly sparked even more demonstrations across the country this weekend.

One person is dead and another is in custody following a shooting at a Black Lives Matter protest in Texas. The gunfire happened in downtown Austin on Saturday night.

A car reportedly pulled up and open fired on a group of protesters. The unidentified male victim was reportedly just feet away from the shooter’s car at the time of the incident.

#BREAKING: Police are on scene of a shooting that occured during a protest in Austin, TX. The area is blocked off and police are asking everyone to avoid the area. **Video may be sensitive to some.** pic.twitter.com/BDsizx4OkT

Authorities believe the victim was armed with a rifle.

“Austin police were on scene in the 300 block of Congress Avenue monitoring protesters when shots were fired. One adult male victim was located with a gunshot wound. That victim was transported to Dell Seton, but was pronounced deceased shortly thereafter.” – Senior Officer Katrina Ratcliff, Austin Police Department

The suspected shooter has been arrested and is reportedly cooperating with police. 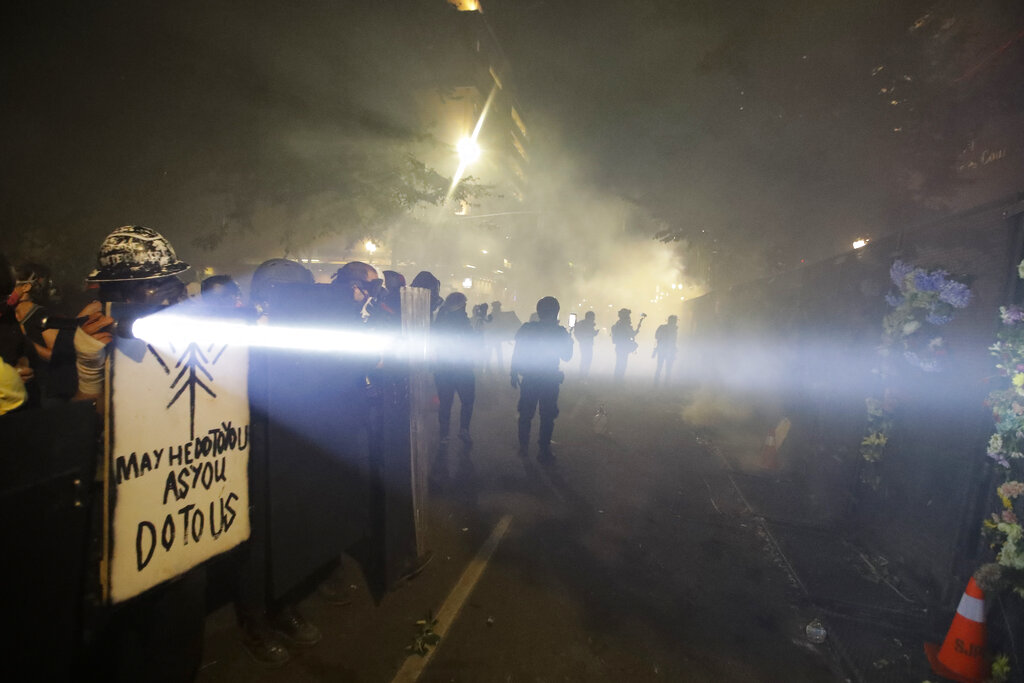 As protests across the country continue to evolve into riots, authorities have urged demonstrators to end the violence to better work towards peace.

MORE NEWS: McEnany: Federal Government Has A Duty To Uphold The Law In Portland