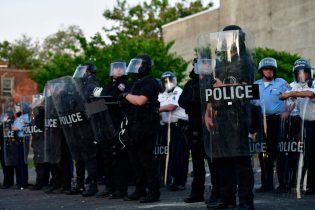 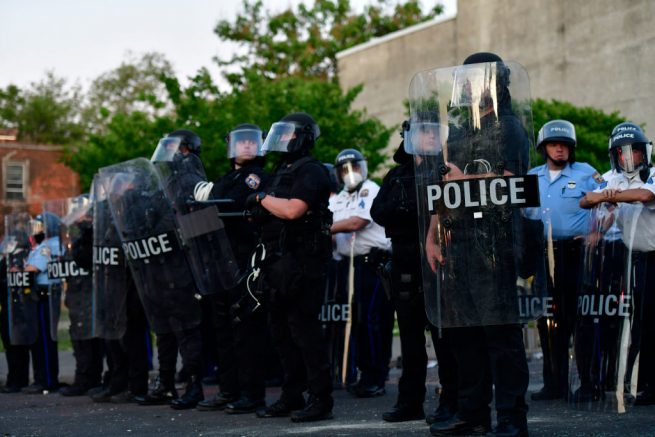 Police create a barrier in front of a damaged vehicle during widespread unrest. (Photo by Mark Makela/Getty Images)

Philadelphia, Pa. has been the latest city to see violent demonstrations following a fatal officer-involved shooting of a man armed with a knife in the city’s west side. On Monday afternoon, the incident was captured on cell phone video.

Multiple shootings and a robbery at gunpoint being reported over the scanner in Philly. Unknown if related to the demonstration.

Here are some tweets expressing some of the current sentiments being expressed online. pic.twitter.com/QtJEr7wngc

“Immediately they noticed that he had a knife in his possession and he was brandishing it and waving it erratically,” Sergeant Eric Gripp of the Philadelphia Police Department stated. “Officers ordered him several times to drop the weapon. Unfortunately, he did not do so.”

The two police officers then fired several shots at Wallace. Gripp added that upon being struck, the male immediately dropped the knife and was scooped up by one of the discharging officers, who then took him into his police car and drove him to the nearby Presbyterian Hospital. Unfortunately, the male later succumbed to his injuries.

Following the victim’s death, crowds took to the streets while demonstrations outside the police precinct quickly turned violent.

Traffic cones, water bottles, fireworks being thrown toward a line of police with riot gear as they push down Pine Street in West Philly. pic.twitter.com/IuU2S5cgQc

A police SUV is on fire at 52nd and market, surrounded by a crowd of a couple hundred pic.twitter.com/dwSFbNoMgs

Protestors showed active aggression toward police by throwing bricks and other projectiles at them. One officer, a 56-year-old female sergeant, was reportedly hit by a black pick-up truck. Additionally, a police car was destroyed as protesters vandalized and looted in the area. At least 35 people were arrested including five juveniles.

BREAKING: @PPDEricGripp reports at least 12 @PhillyPolice officers hospitalized at this hour with various injuries. One of them—a 56 year old female sergeant hit by a black pickup truck near 52nd and Walnut. She is in stable condition with a broken leg. #WestPhilly

This incident has followed months of nationwide unrest amid ‘Black Lives Matter’ and Antifa demonstrations in several cities across the country. In the meantime, the names of the injured officers have not yet been released but the mayor has promised a full investigation.