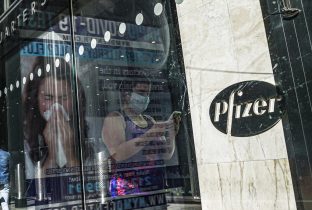 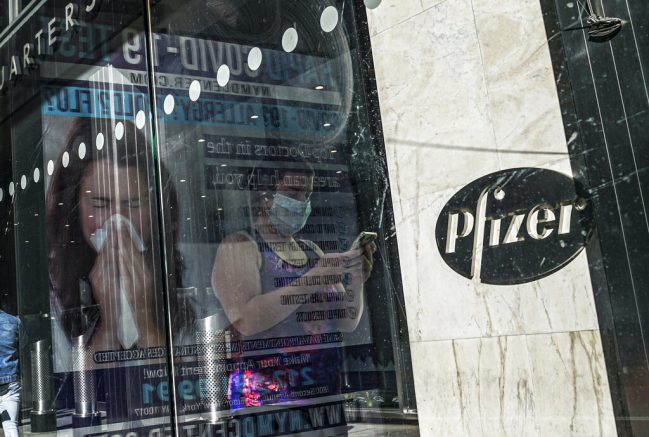 FILE – In this Nov. 9, 2020, file photo, an ad for COVID-19 testing reflects on glass at a bus stop, as pedestrians walk past Pfizer world headquarters in New York. On Friday, Nov. 20, 2020, Pfizer has asked U.S. regulators to allow emergency use of its COVID-19 vaccine, starting a process that could bring first shots as early as next month. (AP Photo/Bebeto Matthews, File)

Secretary of Health and Human Services Alex Azar said Pfizer and BioNTech will be requesting Emergency Use Authorization from the Food and Drug Administration (FDA) Friday.

“And now, Pfizer’s partner, BioNTech has announced they intend to file for Emergency Use Authorization at the FDA,” he announced. “We would expect to see Moderna filing soon also.”

Both Pfizer and BioNTech released interim results of their COVID-19 vaccine trials, which demonstrated a 90 percent effectiveness rate. Later, finalized results showed effectiveness to be closer to 95 percent.

Azar also noted Pfizer’s planned application with the FDA will be reviewed by an independent board of scientists before being granted. Once the FDA grants Pfizer and BioNTech authorization, they plan to ship millions of doses of the vaccine within 24-hours.

Once Emergency Use Authorization comes, "24 hours later, vaccines will be distributed to the American people and be ready for administration." pic.twitter.com/3m2gSSJduh

Likewise, competing pharmaceutical company Moderna has reported a similar vaccine with an efficiency rate of close to 95 percent. These vaccines differ from typical vaccines in the way they attack virus cells.

Typically, a vaccine will inject dead virus cells into the bloodstream, which allows the immune system to recognize the individual virus and produce antibodies that can create an individual’s immunity to the virus.

Instead, these most successful coronavirus vaccines inject people with RNA from the virus. What the body does in response is begin to make a protein based on what that RNA suggests. The RNA in these vaccines directs the body to make spike proteins, the protein which makes up those tiny spikes on the outside of the coronavirus cell.

When this RNA is injected, however, the body begins producing these spike proteins without the virus actually being present. When the immune system recognizes these proteins are in the body, they begin producing antibodies. If the coronavirus enters the body later on, those antibodies will keep the virus from multiplying. In essence, those antibodies make you immune.

Scientists will continue to monitor the tens of thousands of test subjects who have received the vaccine as this kind of messenger RNA has never been widely used before.

Another major area of interest for scientists is how long this immunity could last. Scientists have said it’s possible to get coronavirus more than once, though they also said it’s quite rare.

For now, Emergency Use Authorization of these vaccines could allow frontline workers and other essential personnel to receive vaccinations before the end of the year. However, it may take until late spring or early summer for the vaccine to become widely available to the masses.