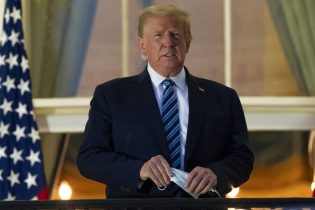 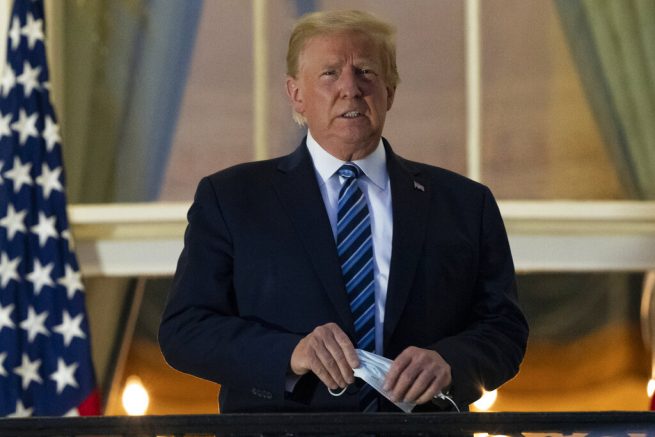 FILE – In this Monday, Oct. 5, 2020 file photo, President Donald Trump holds his mask after removing it from his face as he stands on the Blue Room Balcony upon returning to the White House in Washington from the Walter Reed National Military Medical Center in Bethesda, Md. (AP Photo/Alex Brandon)

President Trump recently extended a message to the nation’s senior citizens, promising to make available to them the very same treatment he received for COVID-19.

The President’s address, delivered from the South Lawn of the White House on Thursday, opened up with an expression of solidarity, where he spoke of his shared experience as a fellow member of the group designated as “at-risk” by medical professionals.

Yet once he tested positive for the virus, the President stated he made a quick recovery thanks to the cutting edge medical care he received at Walter Reed National Military Medical Center. Additionally, he announced that therapy will soon be accessible to seniors at no charge.

“But we have medicines right now and I call them a cure,” he stated. “…we’re gonna make them available immediately, we have an Emergency Use Authorization that I want to get signed immediately.”

An Emergency Use Authorization (EUA) allows the FDA to fast-track the deployment of medical resources during times of national emergency when adhering to a standard timeline has the potential to put lives in peril.

The mechanism has been successfully employed by the Trump administration since the beginning of the pandemic with the FDA issuing the original version of its declaration under the Public Readiness and Emergency Preparedness Act for medical countermeasures against COVID-19 in early February. This was a full month before the World Health Organization had even designated the disease as a pandemic.

The President contrasted the responsiveness of his policies to those adopted by Democrat leaders during past disease outbreaks, specifically taking aim at the Obama-Biden administration’s handling of the 2009 swine flu outbreak during which the CDC reported an estimated 43 to 89 million Americans contracted the H1N1 virus in the span of a single month. That is five to 12 times the total number of COVID-19 cases reported in the U.S. since the beginning of the pandemic

“My opponent, as you know, he talks, but he never did anything in 47 years,” said President Trump. “…he had his chance with H1N1 Swine Flu and it was one of the great disasters.”

President Trump rounded off his remarks by making a pledge to stand behind the country’s seniors while stressing the urgency of distributing the most effective treatments against the virus as soon as possible.