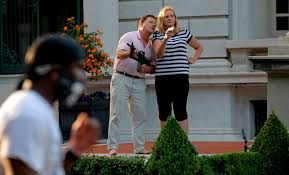 A St. Louis, Missouri couple who went viral for pointing guns at protesters recently spoke out about the incident. On Monday, Mark and Patricia McCloskey said they pointed their guns at protesters outside their home because they were afraid for their lives.

They went viral on social media Sunday after they were filmed wielding the weapons as a crowd of demonstrators marched toward the home of the city’s mayor to demand her resignation.

A couple has come out of their house and is pointing guns at protesters in their neighborhood #StLouis #lydakrewson pic.twitter.com/ZJ8a553PAU

“The threatened our dog’s life, they threatened to burn down the house,” Mark McCloskey stated during an interview. “Seemingly hundred of people said, ‘we’re going to come back to get you later.’”

Mr. McCloskey also said the protesters destroyed the gate leading into their neighborhood. However, it’s still unclear if the gate was broken by protesters.

In a statement, the couple’s attorney claimed the family supports the Black Lives Matter movement and their actions were not race-related.

#StLouis Mark McCloskey says the "protesters" threatened to kill his dog, burn down his house, and burn down his office. Mark says he isn't against the protests and even represents clients who have been the victim of police brutality. pic.twitter.com/0HFhvAuz1e