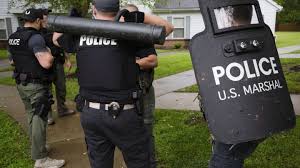 The U.S. Marshals Service released a statement Friday noting they have recovered 27 missing and exploited children in Virginia as a result of what they called ‘Operation Find Our Children.’

Operation Find Our Children resulted in the recovery of 27 previously missing children throughout the Commonwealth of Virginia: https://t.co/L4c8JN81dL

More than 60 law enforcement investigators worked with more than 50 employees from the Virginia Department of Social Services, a number of medical professionals and experts with the National Center for Missing and Exploited Children to carry the mission out.

The actual recoveries took place over the course of five days. In addition to the 27 who were rescued, six reportedly missing children were found safe in the custody of their legal guardian.

The Department of Justice has released a statement saying this latest rescue mission brings the total number of endangered and missing children recovered by the U.S. Marshals Service this year to more than 440.

After a similar operation in Ohio, which resulted in the recovery of 45 children and 177 arrests, officials said they are looking at everything. This includes online attacks.

Moving forward, the Department of Justice said they are dedicated to protecting the most vulnerable children and will continue to be vigilant in tackling the issue of human trafficking.