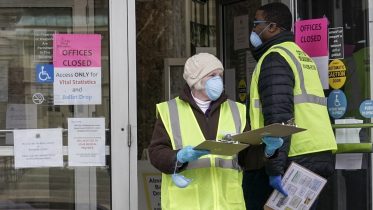 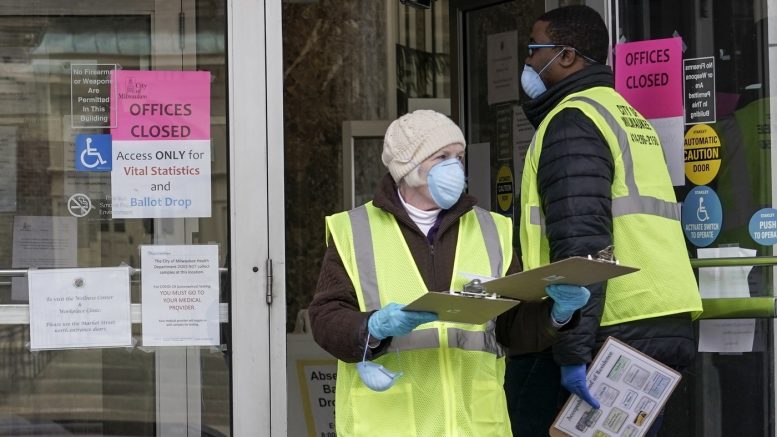 Workers are seen outside a city building in Milwaukee, Wisconsin which set up drive-up early voting for the state’s April 7 election in response to the coronavirus outbreak. (Morry Gash/AP Photo)

The difficulties began about two weeks before the April 7 primary. Absentee ballot records were created in the middle of the night at a time clerks would not be creating ballot records.

Election staffers believe that while clerks were printing mailing labels, the voting system restarted and created additional ballots. This led clerks to think the ballots from the new batch were already mailed out.

“There’s always a concern that something would happen, but I hope what we’ve done would eliminate that or keep that at a minimum,” stated Dave Shively, Election Commissioner for Lancaster County. “And I truly hope that, you know, our push to get people to vote early will keep fewer number of peoples, people going to the polling sites on Election Day.”

A report by the Wisconsin Election Commission revealed this glitch caused more than 2,600 absentee ballots in Oshkosh to be unaccounted for. Despite the discrepancy, the report indicated the election was successful as the state received record numbers in mail-in and absentee votes during a primary.

“Normally, a turnout for a state primary, presidential primary will probably be between 50 and 55,000 for Lancaster County,” said Shively. “So, we already know that our turnout’s going to probably be a record.”

As the general election approaches, Wisconsin voters are suing the state’s election committee and are demanding it provide safe in-person voting options. They are requesting absentee ballot request forms to be sent to all voters in time to ensure successful voting this November.

The Wisconsin Election Commission will meet Wednesday to brainstorm solutions for any potential problems that could arise in future elections.