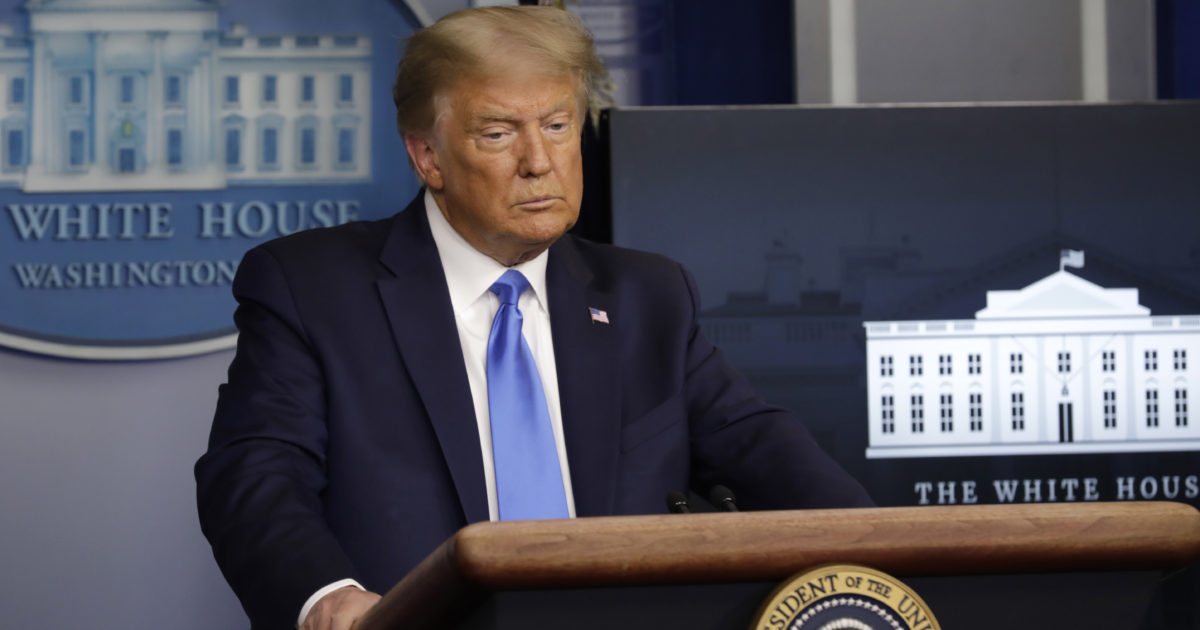 Asked at a press conference yesterday whether he would “commit here today for a peaceful transferal of power after the November election,” President Trump declined to answer in the affirmative.

Instead, he offered a non-committal response before diverting to a secondary pet peeve. “Well, we’re going to have to see what happens,” he said. He then complained about the voting process. “You know that I’ve been complaining very strongly about the ballots, and the ballots are a disaster,” he continued, presumably referencing this year’s expected uptick in mail-in voting, which the president has repeatedly criticized.

Once again, the reporter pressed Trump on whether he would “commit to making sure there’s a peaceful transferal of power.”

Reporter: “Win, lose or draw in this election, will you commit here today for a peaceful transferal of power after the election?”

President Trump: “We’re going to have to see what happens.” pic.twitter.com/h5RF3dKPD1

As if often the case when Trump speaks, his disjointed sentences leave some room for interpretation. The most alarming interpretation, and the one least likely to be true, is that Trump was refusing to commit to a peaceful post-election transferal of power, that he was signaling a willingness to interfere with the election process (“get rid of the ballots”) in order to gain electoral advantage, and that he plans to be president after the election (“a continuation”) no matter the outcome of the vote.

Another possibility is that Trump was not declaring his intention to make an authoritarian post-election power grab, but evading a direct response in order to focus on himself and his personal grievances. In this interpretation, he was merely saying, in his familiar haphazard way, that he doesn’t expect there to be a transfer of power because he expects to win the election, and then griping about the balloting process.

Neither interpretation is flattering, but the second, more likely version is obviously less troubling since it suggests that Trump is not a dictator in the making but a narcissist who speaks in jumbled half-thoughts and frequently appears incapable of engaging with any idea except through the lens of his own resentments.

That interpretation fits with Trump’s recent responses to other questions that should be easy to answer, such as “How do you think history will remember John Lewis?” to which Trump replied, “He didn’t come to my inauguration”; and “What are your top priority items for a second term?” to which Trump replied with some rambling thoughts on the word “experience” and by calling John Bolton an idiot. (Fair enough.)

The less-worrying interpretation of his response still does not reflect well on Trump. One of the president’s core duties is to speak clearly, partly to communicate his intentions to Americans and the rest of the world, and partly because his words can carry the force of law. Yet Trump’s garbled manner of speech consistently renders his meaning unclear, raising fears about what he might have meant, and what he might be planning. We should expect presidents to be able to answer easy questions clearly and directly. And the transfer of power question was an easy, easy question.

So Trump’s answer probably wasn’t a warning that he’s planning to subvert the election. But it was a fundamental failure of presidential coherence and competence. If you are the President of the United States, and you are asked a question that in any way resembles, “Will you commit to the peaceful transfer of political power if you lose the coming election?” the only acceptable answer is “Yes.”