“CASES, CASES, CASES … Cases are up because TESTING is way up,” tweeted President Donald Trump on Saturday. He was frustrated that the news media were reporting the highest level of diagnosed cases of COVID-19 since the pandemic began back in February. It’s true, of course, that more testing will reveal more cases, many of them among low-risk people. But parsing the data from the COVID Tracking Project shows that the increase in the count of American COVID-19 cases is not just due to more testing; there is more community spread too.

Max Roser, the proprietor of the invaluable site Our World In Data, responded to the president’s tweet by pointing out that “when more testing means that you are finding more cases then you are *not yet testing enough*.” Roser also explained that “a crucial metric is the positive rate. It is low when a country tests in proportion with the size of its outbreak. The US is a country that never achieved that and doesn’t achieve it now. That’s why it is true there that more testing means that you find more cases.” When a place is doing enough tests, the positive rate falls and becomes very low.

Is the president right that “TESTING is way up” in the U.S.? According to the COVID Tracking Project, the seven day average for daily tests peaked in late July at around 850,000 and then fell to 725,000 by mid-September. The current seven-day average has now risen to 1.1 million tests. So COVID-19 testing is indeed up, but is it up enough?

The percent positive testing rate is a critical indication of how widespread an infection is and whether levels of testing are keeping up with levels of disease transmission, explain David Dowdy and Gypsyamber D’Souza, a pair of epidemiologists at Johns Hopkins University. A test positivity rate above 5 percent is generally considered to be too high. 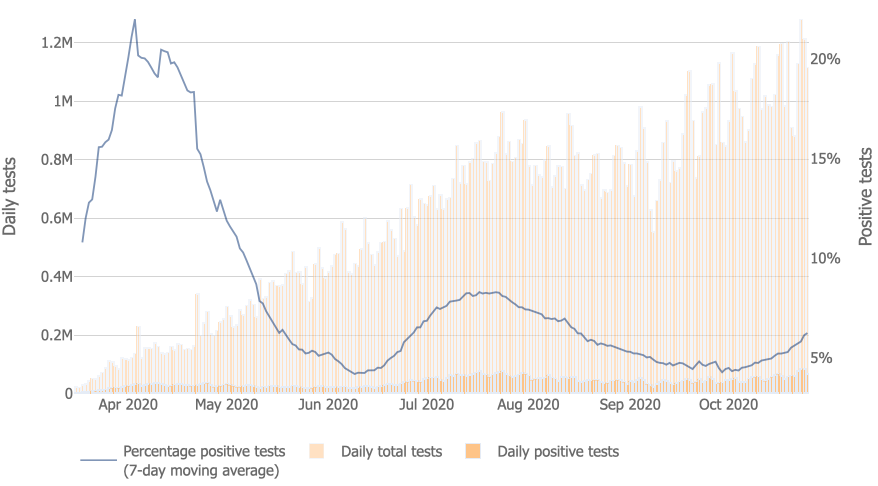 At the beginning of the pandemic, when available testing was nearly non-existent, the positivity rate reached a seven-day average of 22 percent. That fell to 4.2 percent by late June before rising to 8.2 percent during the summer surge in COVID-19 infections. By late September, the positivity rate had fallen below the 5 percent threshold to 4.3 percent.

As the number of daily tests has slightly increased in the past month, so too has the positivity rate, with the seven-day average now standing at 6.2 percent. Unfortunately, this calculation indicates that tests are not just detecting more cases but that the COVID-19 transmission rate in many communities is accelerating.

Another sign that we’re seeing more than just an increase in testing: The COVID-19 hospitalization rate is rising. Writing in The Wall Street Journal, former Food and Drug Administrator Scott Gottlieb notes that hospitalizations are now at 42,000, up from 30,000 a month ago, even though COVID-19 hospital admission criteria have become more stringent.

In a tweet today, the president complained that the “Fake News” is reporting “COVID, COVID, COVID…in order to change our great early election numbers. Should be an election law violation!” Even if he were right that new reports about the spread were wrong, the president shouldn’t be calling for restrictions on the press. But alas, he’s not right about it being fake news either: The pandemic is again surging.