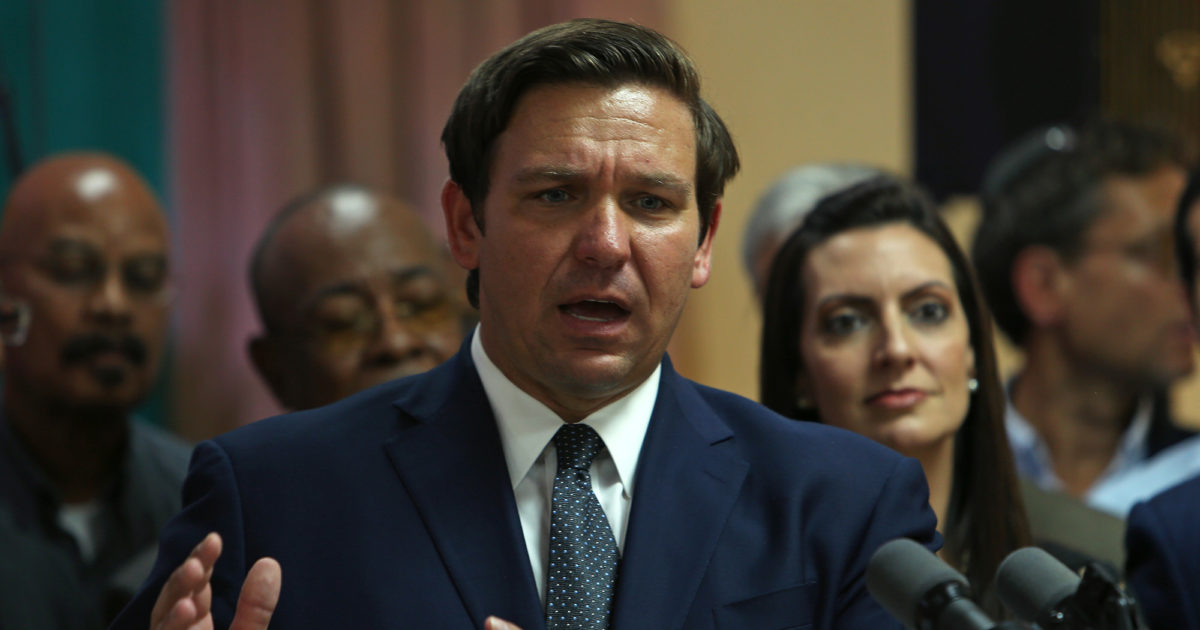 Florida localities are in rebellion following an order from Gov. Ron DeSantis (R) forbidding them from collecting fines and penalties “associated with COVID-19 enforced upon individuals.”

That prohibition on collecting fines came as part of a larger executive order DeSantis issued this past Friday allowing restaurants and bars that serve food to open at 100 percent capacity statewide.

Mask-mandating municipalities across the state say that they will continue to enforce their local COVID-19 restrictions, regardless of the governor’s order

“We will continue to issue citations for those not wearing masks. It is a public safety measure,” said Miami-Dade County Mayor Carlos Gimenez, in a Tuesday press conference. “We cannot collect fines, but we can issue fines. The county will collect once the governor’s order expires.”

Miami-Dade police and code enforcement officers are empowered to issue fines of up to $100 to individuals who are out of compliance with the county’s New Normal guidelines, which require a mask be worn in public at all times.

The city of Miami has even stiffer penalties on the books. Those not wearing masks are subject to $100 fines on the first and second offense and arrest for a third violation.  The city has also dedicated 39 police officers to enforcing its mask mandate.

Many of the states and localities that have imposed mask mandates have not proactively enforced them, effectively making them non-binding guidelines.

That’s not been the case in the Miami area. Miami-Dade police issued 162 citations within the first two weeks of having its mask mandate on the books, according to the Miami Herald. Police reportedly ticketed people for taking their mask off outside, and for not having it cover one’s nose. As of mid-August, the Herald reports that Miami Dade police have issued 225 citations.

The city of Miami Beach has been even more proactive. Between late July and mid-August, officials there have issued fines to 288 people worth a collective $14,440.

The Herald again has documented how many of these fines were issued to people not wearing masks outside.

Other local governments in Florida have instead focused their enforcement against businesses, who can be fined for not enforcing mask-wearing and social distancing protocols for patrons and employees. The ability to fine businesses is presumably unaffected by DeSantis’ order, which restricts itself to suspending fines for individuals.

The Naples Daily News reports that businesses and local governments are seeking clarification on the extent of the governor’s order.

There’s an argument for mask mandates on libertarian grounds, namely that they correct for the negative externality of people walking around infecting others. By mitigating the spread of COVID-19, these mandates make the need for other, more onerous COVID-19 restrictions obsolete.

This theoretical case has to be weighed against how mask mandates, and the enforcement of them, works in the real world.

“With masks, the question is how mandates work when compared to the next best alternative,” wrote economists Steve Horwitz and Donald J. Boudreaux in an op-ed for The Detroit News.

“How many more people would use masks if they are mandated versus simply relying on strong social pressure and private sector no-mask, no-service rules? It might not be many,” the two write, adding that “by creating more opportunities for encounters between law enforcement and the citizenry, mask mandates create yet one more way for authorities to harass the relatively powerless.”

Studies showing the effectiveness of mask mandates often do not measure the level of enforcement or rates of compliance with those mandates, nor do they distinguish the effect of government mask mandates versus societal norms encouraging mask-wearing.

The way Miami is enforcing mask requirements vindicates the case against these mandates. Police are setting up mask traps and randomly fining people not wearing masks outside, where the risks of transmission are much lower.

DeSantis was right to try to put a stop to these abuses with his executive order. Hopefully, more will be done to prevent those municipalities from trying to issue fines.