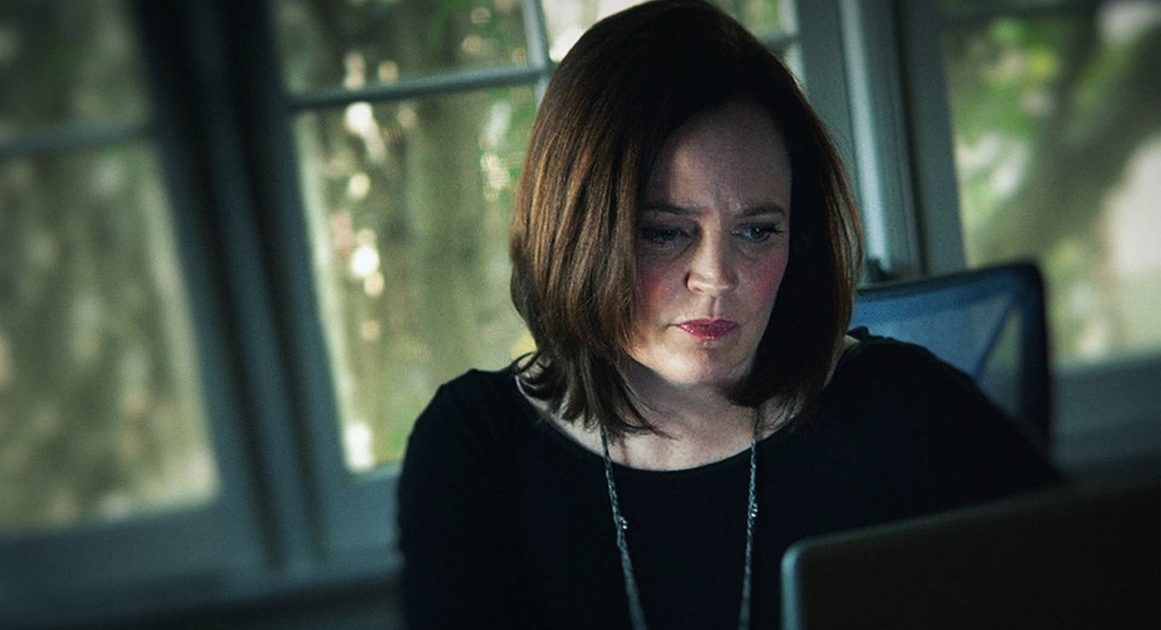 I’ll Be Gone in the Dark. Available now on HBO Go and HBO Now.

I’ll Be Gone in the Dark as an account of a true-crime blogger’s pursuit of a serial killer is a confused, confusing, and yet compelling piece of work. When Executive Producer Liz Garbus started shooting her six-hour documentary, she didn’t know that the killer—a former cop who raped and murdered up and down California for at least a dozen years—would be captured before she finished. Even less was she aware that all the hard—even obsessed—work of her blogger heroine, Michelle McNamara, would turn out to be almost entirely irrelevant to the resolution of the case.

The result is a documentary that fitfully lurches one way, then another: a troubling tale of a journalistic Captain Queeg, her grip on life slipping away as she pursues a phantasmagorical murderer who may not even be alive; a gripping portrayal of rape survivors trying to put their lives back together after a terrifying experience that they’re not entirely certain has ended; and an illuminating but frustratingly incomplete portrait of a psychopath and his fractured descent from burglar to rapist to murderer.

Some of these stories are told better than others, and the transitions can be flabby and repetitive. A skillful editor probably could have trimmed 90 minutes out of I’ll Be Gone in the Dark that wouldn’t be missed.

But the sinewy thread at its center—of survival and surrender, of the pebble-in-a-pond ripples that spread out from crime and violence to claim victims far from the scene—is in the end a commanding presence. Stopping the show once you’ve started is nearly impossible.

Though he’s off-screen for much of I’ll Be Gone in the Dark and a blurry confection of scared-witless accounts when he’s there, the character that keeps the documentary’s motor running is the East Area Rapist, as he’s known in Northern California, or the Original Night Stalker, as he’s called in the south. Ultimately he would be dubbed the Golden State Killer by McNamara, a name that stuck.

He had type-A blood, a tiny penis, and a knife he wielded like a malevolent artist. He wore a ski mask over his face and disguised his voice by speaking through clenched teeth. Increasingly arrogant as his toll of rape victims mounted—there would be at least 50 before he was done, along with 13 murders—he would stroll the house, making himself snacks and once even eating a Christmas turkey as the women (and their boyfriends or husbands, if present) lay hog-tied in bed.

One female detective, despairing at how long it was taking to catch him, sought advice on how the women might resist him. A shrink who tried to administer therapy to rapists locked up in the California prison system agreed to talk to some of them. Replied one, recounting one of his attacks, “She fought back, and she’s dead.” The shaken shrink advised her detective friend: “You better catch him.” Eventually, the killings began.

The police were not the only ones pursuing him. Michelle McNamara, an aspiring Hollywood screenwriter with a fascination for crime since the murder of one of her childhood neighbors, authored a popular blog on unsolved crimes called True Crime Diary. It increasingly focused on the East Area Rapist.

And as McNamara linked up with message boards full of like-minded true-crime fanatics, she found herself as the unofficial commander of a cyber-vigilante squad stalking the rapist. They called themselves “citizen detectives,” and that was in their modest moments. “We’re crusaders. We’re warriors. We’re on the path,” says one of them interviewed in I’ll Be Gone in the Dark.

Online congregations of DIY detectives are nothing new. They go back at least to the O.J. Simpson trial, when message boards bristled with theories that the real killer was probably Simpson’s airheaded houseguest Kato Kaehlin. Some of the East Area Rapist hive-mind set was at least as daft. One of them, prosecuting a grudge against an old boyfriend, actually hijacked a sample of his DNA to be tested against that of the rapist. (Spoiler alert: No match.)

McNamara didn’t do anything that stupid, or maybe anything stupid at all. She was a genuine journalist, interviewing cops constantly and becoming, as several of them acknowledged, a genuine expert on the case—to such a degree that they gave her 37 cartons of old notes and reports.

Eventually she published a chilling story in Los Angeles magazine—reading it, her editor said, was “like an elevator plunging 20,000 stories”—that revived interest in what was by then becoming a cold case. The story attracted interest from everybody from Stephen King to crime novelist Gillian Flynn, and McNamara got a book contract.

“I have 18 months to do it. I know I’m going to have periods of total stress and doubt,” she wrote. “But I think I have it in me to finish this thing.

That bit of foreshadowing was as accurate as it was harrowing. Caught up in the certainty that she was closing in on the East Area Rapist, McNamara was awash in paranoia (she and her husband even bought a fake gun that fired only blanks) that she kept at bay only with a rash of prescription drugs, including Adderall, opiates, and antidepressants. Some of them she got legitimately; others, not so much. Her emails and voicemails are littered with pleas scrounging spare Percocet and Ambien from friends and loved ones, and her pursuit of Xanax sounds suspiciously like an addiction. In 2016, she died in her sleep of an accidental overdose, her book unfinished.

The book would finally be published in 2018, just a couple of months before the arrest of the East Area Rapist/Original Night Stalker. He turned out to be a former cop named Joseph DiAngelo who used his police training to minimize the clues he left behind.

His capture had nothing to do with McNamara or her work. (His name did not appear in any of her research materials, and nothing investigators found in house suggested he was aware of her blog or book.) He was done in by a crime-solving technique that he could not possibly have foreseen when he began his crime spree nearly five decades ago: DNA matching, a process that required cops to painstakingly reconstruct family trees going back to the 1840s and took years to complete. In the end, DiAngelo couldn’t disappear into the dark, as he swaggeringly declared he would to one of his early rape victims. But McNamara, tragically, did, one more victim of a man who lived to inflict hurt and was all too successful at it.