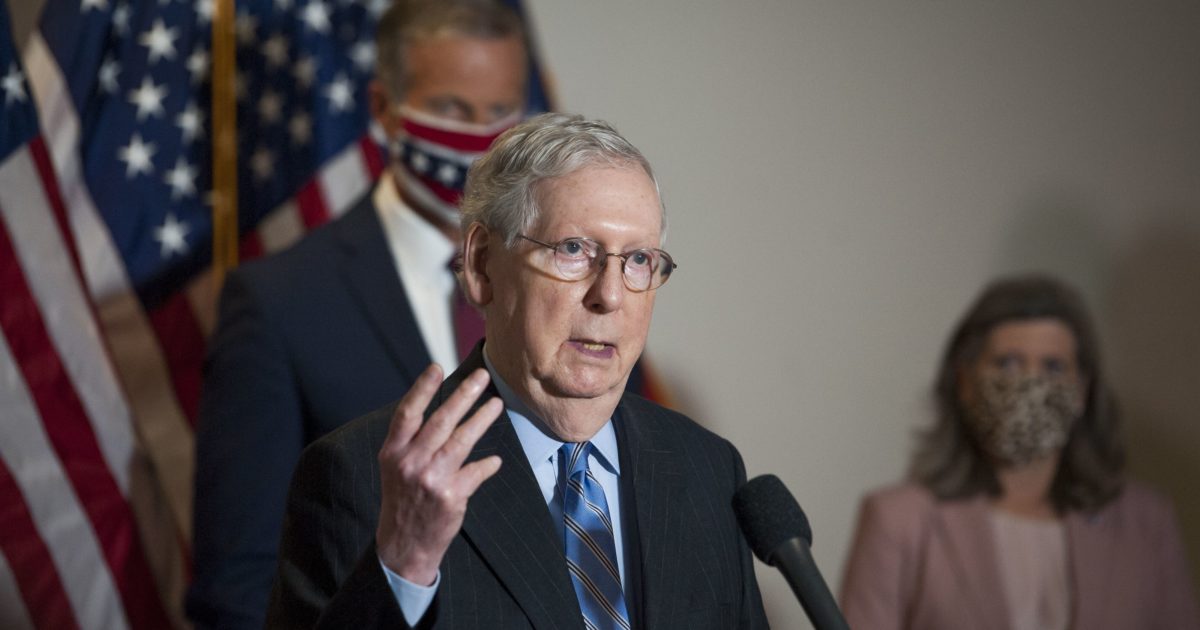 On Tuesday, Senate Republicans introduced a $500 billion COVID-19 stimulus bill, pared back from their $1 trillion proposal which they introduced in July. The new bill nixes another payout of stimulus checks but includes unemployment benefits, loans for small businesses, and funding for education and the post office.

It stands no chance of passing the House, with Democrats advocating for the fatter $3 trillion Health and Economic Recovery Omnibus Emergency Solutions (HEROES) Act. The GOP bill is “only intended to help vulnerable Republican senators by giving them a ‘check the box’ vote to maintain the appearance that they’re not held hostage by their extreme right-wing that doesn’t want to spend a nickel to help people,” said House Speaker Nancy Pelosi (D–Calif.) and Senate Minority Leader Chuck Schumer (D–N.Y.) in a statement.

But $500 billion is quite a bit more than a nickel. The bill, somewhat ironically deemed a “skinny” stimulus, would provide $300 a week in federal unemployment benefits through the week of December 27, down from the $600 a week that lapsed in July. That would be in addition to state sums, as well as the $300 a week in federal unemployment benefits that President Donald Trump issued via an August executive order, though those exclude the lowest-wage workers and are expected to be more short-lived.

The bill allots $258 billion for the Paycheck Protection Program meant to help small businesses hit hard by government-mandated closures and social distancing requirements. Business owners may apply for a loan worth 2.5 times their payroll costs—not to exceed $2 million—so long as they employ fewer than 300 people and can show their revenues have decreased by at least 35 percent in the first or second quarter of this year.

“If anyone doubts [Senate Majority Leader Mitch] McConnell’s true intent is anything but political, just look at the bill,” Pelosi and Schumer said in their statement. “This proposal is laden with poison pills Republicans know Democrats would never support.”

That’s likely a reference to the $105 billion the GOP bill carves out for education. Though the majority of that would go toward schools that opt for in-person learning, some of those funds would finance scholarships supporting school choice—something high-profile Democrats now almost uniformly oppose.

The Democrats’ proposal would re-up the $600 a week in federal unemployment benefits through the end of March 2021. Freelancers and self-employed people who are ineligible for traditional unemployment programs but were given special exceptions at the start of the pandemic would receive the sum through January. The bill would issue another round of stimulus checks at a maximum of $1,200 a person and $6,000 a family, with those payments scaled down for individuals who earn more than $75,000 a year and for couples who pull in more than $150,000. Individuals with yearly salaries of $99,000 and above (and childless couples whose earnings top $198,000) would be ineligible. Families who make below $270,000 may still be able to collect benefits, with those funds tiered based on the number of children in the household. For example, a couple that makes $200,000 a year and has three children would receive a $3,500 stimulus payment.

Also missing from the GOP bill, and core to the Democrats’ legislation, is funding for state and local governments to compensate for dwindling tax revenues. The HEROES Act currently stipulates that a collective $875 billion go toward that cause—$375 billion more than the Republican bill in total.