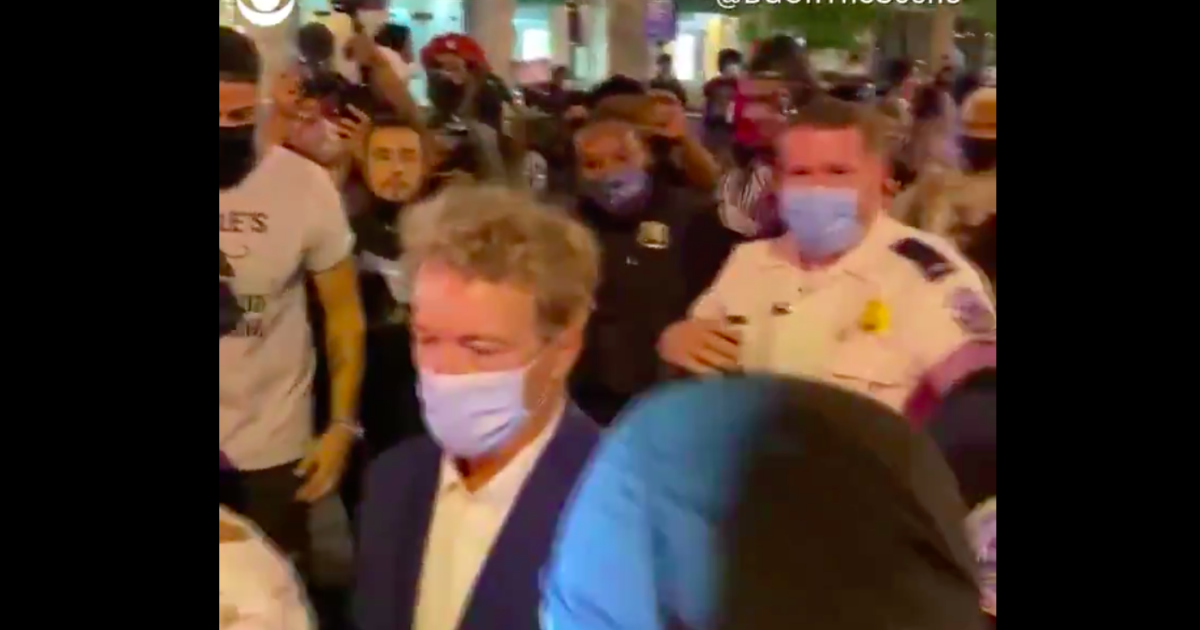 The police prevented the protesters from getting close to the Pauls, but there was a great deal of shoving. Someone attempted to throw a bike at them, and the officer escorting the Pauls was briefly knocked off balance. Sen. Paul later told Fox News that he feared for their safety.

“I truly believe this with every fiber of my being, had they gotten at us they would have gotten us to the ground, we might not have been killed, might just have been injured by being kicked in the head, or kicked in the stomach until we were senseless,” he said.

Recall that Paul is no stranger to physical violence: He was brutally attacked by his next-door-neighbor in 2017, suffering injuries to his ribs and lungs. He was also present at the 2017 Congressional baseball game shooting.

WATCH: Protesters confronted Kentucky Senator Rand Paul after attending the RNC at the White House, shouting at the lawmaker to acknowledge the shooting of Breonna Taylor https://t.co/JmxvZJy29u pic.twitter.com/tTONwewPcR

It’s notable that the protesters repeatedly shouted at Paul to “say her name.” The her in question is Breonna Taylor, a woman who police killed during a no-knock raid on her home in the middle of the night on March 13. Taylor is an unambiguous victim of police violence and of unnecessary Drug War tactics, and protesters are right to demand justice for her.

Paul, though, has done much more than just saying Taylor’s name: He sponsored the Justice for Breonna Taylor Act, which would prohibit no-knock raids.

“After talking with Breonna Taylor’s family, I’ve come to the conclusion that it’s long past time to get rid of no-knock warrants,” said Paul back in June. “This bill will effectively end no-knock raids in the United States.”

It would be wrong to physically intimidate the Pauls in any case. But the crowd also failed to recognize that their alleged foe is one of the most consistent voices for criminal justice reform in the U.S. Senate. To borrow a favorite phrase of the woke activist crowd: Educate yourself, street protesters.