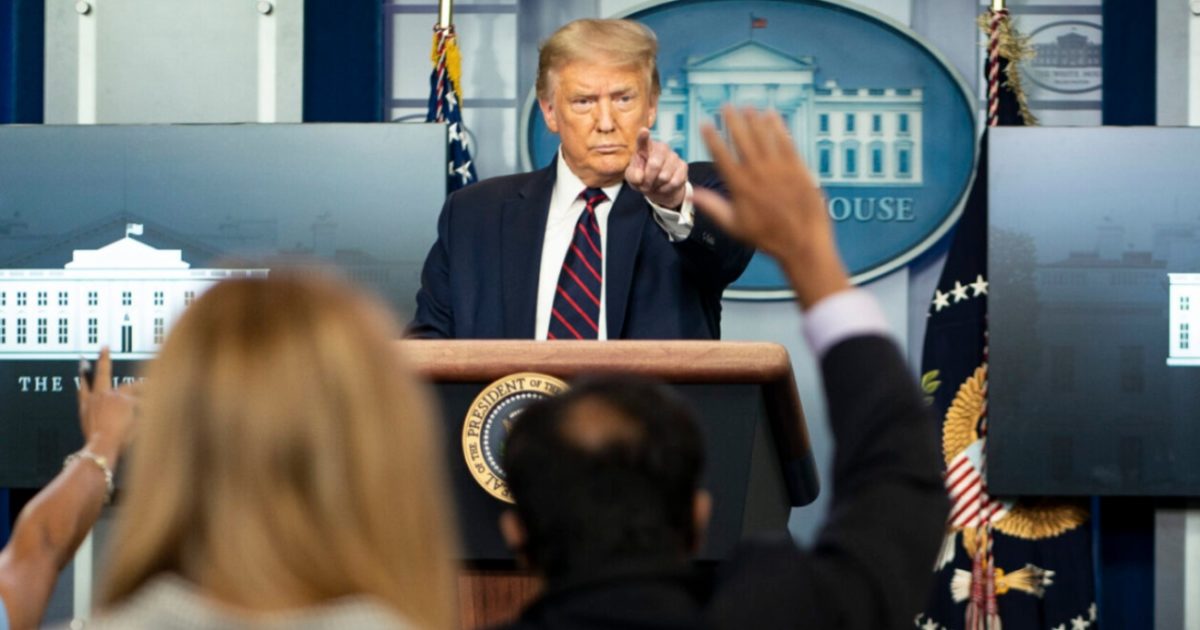 Forget all that, Trump implied today by retweeting a message claiming that the official COVID-19 death toll, currently about 187,000, is off by a factor of 20. “So get this straight,” says the summary of an August 29 Gateway Pundit post that was originally tweeted by Trump attorney Jenna Ellis. “Based on the recommendation of doctors [Anthony] Fauci and [Deborah] Birx the US shut down the entire economy based on 9,000 American deaths [due] to the China coronavirus.” Trump thus implicitly rebuked his own COVID-19 advisers (and himself) for grossly overstating the danger posed by the disease.

As Fauci, Birx, and Trump himself should have recognized at the time, the projection of as many as 2.2 million deaths from COVID-19 in the United States was never realistic. It was based on what now seems to be an overestimate of the COVID-19 infection fatality rate, plus the demonstrably wrong assumption that Americans would carry on as usual in the face of the epidemic. The contrast of a vaguely defined “intervention” with a counterfactual “no intervention” scenario presented a false dilemma that obscured the actual choices policy makers were confronting.

Now Trump, who has offered contradictory messages about COVID-19 throughout the epidemic, has swung to another extreme that is equally at odds with reality. The claim that only 9,000 or so Americans have died from COVID-19 is based on a misinterpretation of newly released data from the Centers for Disease Control and Prevention (CDC).

As of August 22, those data indicate, “COVID-19 was the only cause mentioned” in just 6 percent of deaths attributed to the disease. The rest of the deaths involved an average of “2.6 additional conditions or causes.” The CDC’s numbers also show that COVID-19 fatalities have been concentrated among people 65 and older, who accounted for 81 percent of fatalities in the week ending April 18, when deaths tallied by the CDC peaked, and 82 percent of fatalities in the week ending August 22, when the death toll was much lower.

These patterns are consistent with something we have known for months: Older, less healthy people are especially vulnerable to COVID-19. But that does not mean COVID-19 is not actually killing them.

It is possible that some people whose deaths are attributed to COVID-19 would have died anyway from preexisting medical conditions. But judging from excess mortality calculations, particularly for people with pneumonia or flu-like symptoms, most of these patients would still be alive but for the virus. While determining which is true for any given individual can be an iffy proposition, overcounting of COVID-19 deaths is probably a less significant problem than undercounting, since virus testing was very limited in the early stages of the epidemic, and people who died at home from COVID-19 without being tested could easily have been missed.

In any case, it is clearly not reasonable to assume that every COVID-19 death involving comorbidities was not really a COVID-19 death. Yet that is what the Gateway Pundit post promoted by the president does. “Only 6% of all coronavirus deaths were related to the coronavirus alone,” Joe Hoft writes. “The rest of the deaths pinned to the China coronavirus are attributed to individuals who had other serious issues going on. Also, most of the deaths are related to very old Americans.” From those facts he concludes that “the number of deaths related to the China coronavirus” is “minuscule.”

The estimate of “9,000 American deaths” in the subhead retweeted by Trump seems to have been derived from the CDC’s provisional death count as of August 22, which was 161,392. If you multiply that number by 6 percent, you get 9,684. But that calculation is based on the unjustifiable assumption that COVID-19 has not been the but-for cause of any deaths involving people with preexisting medical problems.

As with his rhetoric about crime and rioting, Trump wants to have it both ways with COVID-19. Republicans portray Trump as a savior whose decisive action prevented “millions” of COVID-19 deaths, a claim that relies on the unrealistic “no intervention” projection Trump endorsed in March. Yet now the president seems to think COVID-19 never presented a serious threat at all. Both propositions cannot possibly be true.