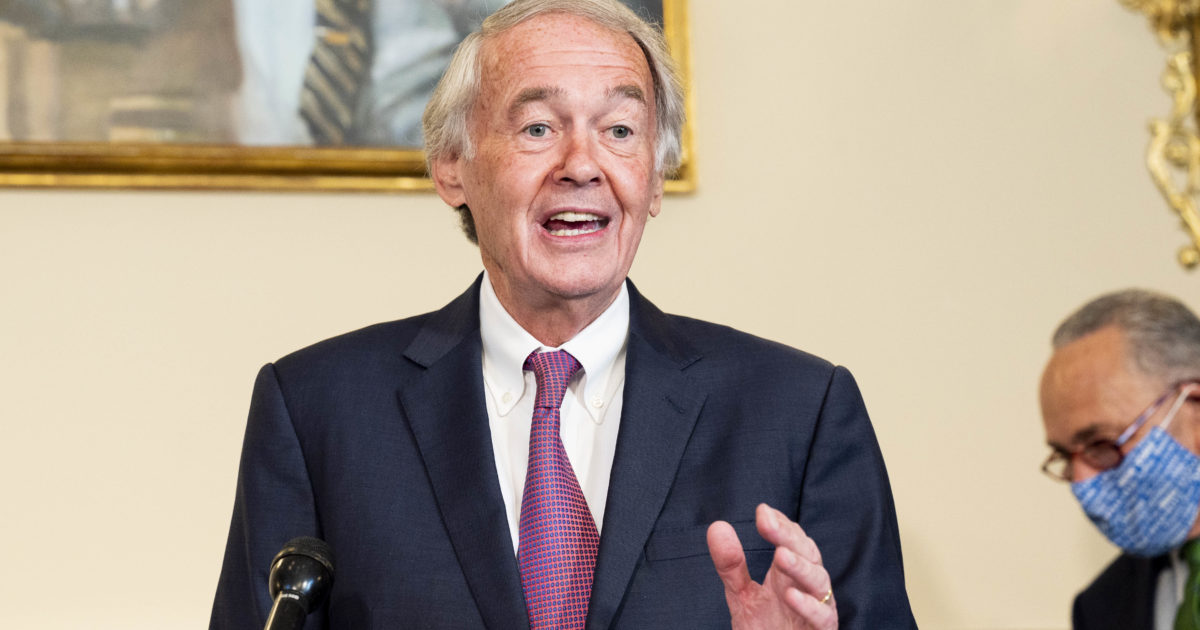 The possibility of President Donald Trump placing a third justice on the Supreme Court has some Democrats contemplating abolishing the filibuster if the 2020 election gives them control over the Senate.

The filibuster is a standing provision in procedural rules for the U.S. Senate that allows any senator unlimited floor time to discuss pending legislation. Senators can use that time to stall a bill indefinitely, or until a three-fifths supermajority of senators votes to cut them off and bring an item up for a final vote.

This feature of Senate rules has been used by both and Democrats and Republicans, whenever they find themselves in the minority, to prevent or delay the majority party from passing legislation.

Through the so-called “nuclear option“, a raw majority of senators can permanently limit the type of Senate actions that can be filibustered. Democrats deployed this tactic in 2013 to remove senators’ ability to filibuster the confirmation of executive branch and federal judicial nominees. Republicans did the same thing in 2017 for Supreme Court nominees in order to put Neil Gorsuch on the bench.

That latter action has left Democrats with few options for preventing Trump and the Senate’s current Republican majority from filling the vacancy left by the late Ruth Bader Ginsburg and creating a formidable 6-3 conservative majority on the Supreme Court.

Despite its obvious utility in preventing that perceived disaster, many Democrats are not calling for restoring their ability to filibuster the confirmation of Supreme Court nominees. Instead, they’re saying that they will eliminate the filibuster in its entirety so that no legislation can be held up by a minority of senators.

Going ahead with that plan would likely be a mistake, however. As the results of Democrats’ 2013 reforms show, any weakening of the filibuster by today’s majority can’t help but empower the opposition whenever the senate changes hands.

Given that the electoral map is increasingly stacked against Democrats controlling the Senate, they have the most to lose in the long run from eliminating the filibuster. That’s true even if getting rid of it would help get some progressive policies over the line in 2021.

“Mitch McConnell set the precedent. No Supreme Court vacancies filled in an election year,” said Sen. Ed Markey (D–Mass.) on Friday in reference to Sen. Mitch McConnell’s (R–Ky.)rationale for not allowing votes or holding a hearing on Barack Obama’s Supreme Court nominee, Merrick Garland, in 2016. “If he violates it, when Democrats control the Senate in the next Congress, we must abolish the filibuster and expand the Supreme Court.”

Mitch McConnell set the precedent. No Supreme Court vacancies filled in an election year. If he violates it, when Democrats control the Senate in the next Congress, we must abolish the filibuster and expand the Supreme Court.

“The filibuster wasn’t made w/ purpose. It’s the result of an accident in rulebook revision & bloomed as a cherished tool of segregationists,” said Rep. Alexandria Ocasio-Cortez (D–N.Y.) in response to Sen. Diane Feinstein’s (D–Calif.) defense of the supermajority requirement. “Now it empowers minority rule. That’s not ‘special,’ it’s unjust.”

Sen. Feinstein’s protection of the filibuster is unjust & unacceptable.

The filibuster wasn’t made w/ purpose. It’s the result of an accident in rulebook revision & bloomed as a cherished tool of segregationists.

Over at The New Yorker, Jeffery Toobin argues that getting rid of the filibuster—alongside other reforms like admitting Puerto Rico and D.C. as states and expanding the number of seats on the Supreme Court—would be a good way for Democrats to get retribution for the confirmation of another Republican justice and pave the way for a successful Joe Biden administration to do what it pleases.

“Even in the minority, McConnell will do everything he can to thwart Biden, and the filibuster will be the tool,” writes Toobin. “This antidemocratic relic should be retired once and for all.”

Yet in the same article, Toobin is quite candid about how the past decision to immunize Supreme Court appointments from the filibuster is the cause of Democrats’ current woes.

“Democrats have few procedural tools at their disposal to delay the process,” he says, noting that “under McConnell, the Republicans changed the Senate rules to abolish the filibuster for Supreme Court nominations, so he only needs a simple majority to confirm a Justice.”

He’s not the only current filibuster critic to straddle this seeming contradiction.

Shortly after Gorsuch’s confirmation, Markey himself promised that Democrats would bring back the filibuster for Supreme Court nominations, which he argued was an important safeguard against some slim, transient majority making such a consequential decision.

“We will ensure that for the Supreme Court, there is that special margin that any candidate has to reach because that is essential to ensuring that our country has a confidence in those people who are nominated,” said Markey in an April 2017 interview, according to Politico.

Senate Minority Leader Chuck Schumer (D–N.Y.) likewise bemoaned the decision to weaken the filibuster in 2017, saying on the Senate floor that “today’s vote is a cautionary tale about how unbridled partisan escalation can ultimately overwhelm our basic inclination to work together and frustrate our efforts to pull back; blocking us from steering the ship of the Senate away from the rocks.”

Contrast that with Schumer’s answer to a question in an August radio interview about whether Democrats would abolish the filibuster if they took back the Senate in 2020: “We have a moral imperative to the people of America to get a whole lot done if we get the majority,” he said. He repeated the sentiment in a Saturday conference call, reports The Hill, saying “If Leader McConnell and Senate Republicans move forward with [confirming another Supreme Court justice], then nothing is off the table for next year.”

McConnel, when he was minority leader, offered similarly prescient warnings about the consequences of weakening the filibuster. When Sen. Harry Reid (D–Nev.) deployed the “nuclear option” in 2013 to prevent the filibustering of executive branch nominees and federal judicial appointments, McConnell told Democrats “you’ll regret this and you might regret it even sooner than you might think.”

Republicans went on to recapture the Senate a year later, and have since made a record number of judicial appointments. That Democrats are today largely lining up against the filibuster, rather than calling for its full restoration, proves Schumer’s warnings about the partisan erosion of norms correct. Ship of the Senate, meet the rocky shore.

Democrats—having lost successive battles over the Supreme Court, and being favored by some projections to take back both the presidency and the Senate—are out for blood, and not keen on defending obstacles to the power that they are on the cusp of wielding.

In the immediate term, this rhetorical strategy makes sense. Asserting the value of the filibuster at the present moment isn’t going to bring it back. Threatening to do away with it entirely, on the other hand, could potentially scare some Republicans from voting to confirm a new justice. In an election year, it’s also potentially good politics to attack the filibuster. Promises of a less constrained Democratic Senate majority might help drive progressive turnout.

That argument cuts both ways, however. Democratic threats to brush away obstacles to enacting their agenda could just as easily motivate fence-sitting conservatives who’re none too enamored with Trump to vote for him out of fear of what unconstrained Democrats might do once in power.

Another, more far-sighted argument deployed by progressives is that the filibuster is not ideologically neutral. Democrats, on balance, want to do more things with the government, and therefore are more likely to be frustrated by the filibuster.

Vox‘s Ezra Klein made this very point on a recent podcast about the filibuster.

“Conservatives simply want to do less and stand athwart government yelling stop,” Klein said. “Legislating and being able to act within the context of American government is inherently a progressive act.”

(Klein, in fairness, does acknowledge that a more explicitly nationalist Republican party in the future would have a more proactive agenda, and thus reap more gains from eliminating the filibuster.)

Matt Yglesias, also of Vox, made a related point in a 2019 essay when he argued that it would always be easier for a slim majority of progressives to enact an expansion of the welfare state than it would be for a similar-sized majority of conservatives to undo said expansion.

Progressive programs, he says, create their own constituencies whose self-interest is wrapped up in the preservation of the program. State-shrinking deregulation or spending cuts, on the other hand, do not come with the same advantage.

“If you passed a law making it easier to form labor unions, that would lead to more unionized workers, which would make it harder to pass new anti-union laws,” writes Yglesias.

While Yglesias and Klein could be right about raw majoritarianism (at least in the medium term) benefitting progressives—or at least any faction that wants to expand the size of government—their case becomes less persuasive when applied to the Senate’s filibuster specifically.

The Senate’s membership, as progressives are often eager to point out, advantages Republicans, who are increasingly the dominant political party in rural, whiter states that contain a minority of Americans but can collectively control a majority of the Senate. Empowering majorities in the Senate through the abolition of the filibuster, therefore, will more often than not mean empowering Republican Senate majorities at Democrats’ expense.

Maybe Republicans’ relative lack of a proactive policy agenda would mean they’d end up doing less with those majorities. But they’d still be capable of restricting legal immigration, banning late-term abortions, and requiring social media companies to teach patriotic values (to name a few goals of the contemporary right).

One final case that Democrats currently contemplating eliminating the filibuster should consider is that those checks make politicians like Donald Trump less likely to succeed.

We live in a world of increasing negative polarization, where political factions are defined less by their positive vision and more by fear of what the other side will do with power. It’s in that environment that figures like Trump can garner support despite the likely negative consequences of their policy proposals.

Conservative and Republican voters who might consider themselves Trump-skeptical can still be convinced to vote for the man for fear that empowering an unconstrained Democratic president or Congress would be even worse.

Tying the hands of whichever majority is in power makes that party’s agenda harder to implement, but it also lowers the stakes of losing. That, in turn, might make voters less willing to tolerate objectionably awful behavior on “the other side is still worse” grounds.

I don’t pretend to be a progressive, and support maintaining the filibuster on good old-fashion libertarian grounds: the more checks on the exercise of state power, the better. Given that the Senate filibuster will more often than not check Republicans exercising state power in the near-term, Democrats and progressives should reconsider its utility.